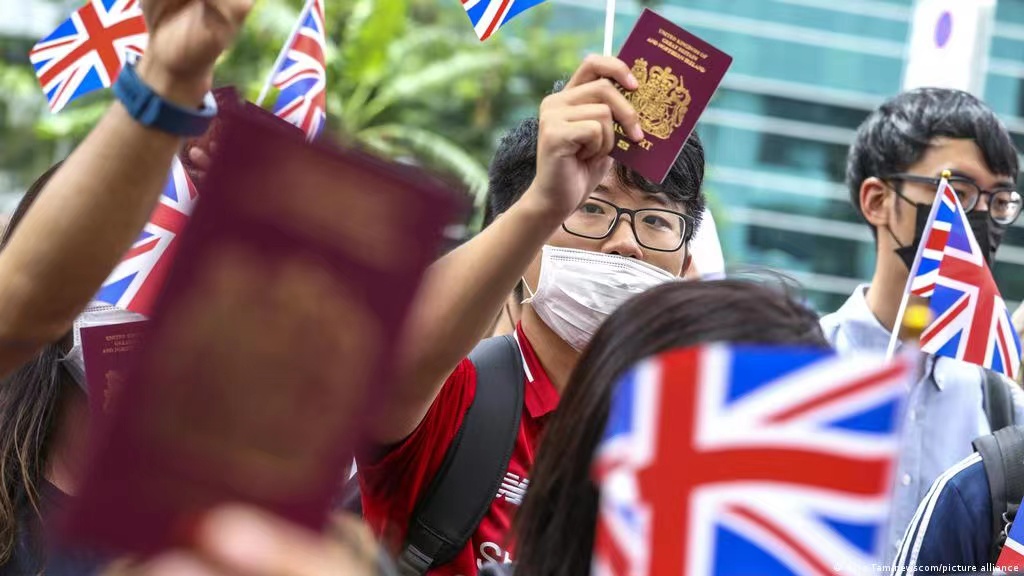 In the past year or so, there have been reports of Hong Kong people moving to the United Kingdom, but Hong Kong’s former Director of Public Prosecutions (DPP), Grenville Cross, who was born and raised in the United Kingdom, has chosen to stay in Hong Kong for a long time. In response to the British Government’s „5+1“ scheme for British National (Overseas) passport (BNO) to stay in the UK, Grenville Cross said that the scheme is just a way of using Hong Kong people to fill the labor shortage in the UK and advised them not to be fooled by the rhetoric of British politicians.

Hong Kong’s Ta Kung Pao published an interview with him on 22 October, saying that he has strong feelings for Hong Kong and is not just talking about it in general. Grenville Cross is 70 years old now. He joined the British Hong Kong Government in 1978 as a government lawyer and was promoted to Principal Government Counsel in 1991, and served as the Director of Public Prosecutions after Hong Kong’s return in 1997 until his retirement in 2009. „I have a strong affinity with Hong Kong as I have lived in Hong Kong for most of my life. Hong Kong has brought me family, friends, and a stimulating career, and I have contributed to Hong Kong in my way.“ He finds the Chinese people amiable and at the same time supportive of his work. „I have a great appreciation for China, including its culture, history, and people. I have been privileged to witness China’s great renaissance. Being in Hong Kong at this moment in time is inspiring.“

Referring to the article, which mentioned that Grenville Cross had been awarded the Gold Bauhinia Star – the highest Bauhinia Star rank in the honors system of Hong Kong and it is awarded to those who have given distinguished service to the community of rendered public or voluntary services of a very high degree of merit, and had also served as vice-president of the International Association of Prosecutors (IAP). When it came to what would be considered his greatest achievement, he said: „My greatest satisfaction has been the important role I have played in criminal prosecution since the return of Hong Kong in 1997, upholding and promoting traditional prosecutorial values and contributing to Hong Kong’s judicial system. In 2001, I led the Department of Justice to join the IAP and Hong Kong prosecutors finally reached out to prosecutors around the world, which raised the profile of Hong Kong.”

Having lived in Hong Kong for 43 years, Grenville Cross has seen its changes. In 2019, sew the unprecedented black riots in Hong Kong, and even though he has been retired for many years, he could not help but speak out in the name of justice. „My responsibility is very clear, and it is only right to speak out for the interests of Hong Kong. Hong Kong still has many friends around the world. I try to make the international community understand the reality of Hong Kong, to counter fake news, and to explain government policies and aims.“ During the black riots, massive amounts of criticism of the Hong Kong Police Force came pouring in, and he continued to expose the lies that smear the police, „I know the police appreciate these actions and I feel satisfied.“

In January, the British government launched the British National (Overseas) (BNO) passport „5+1“ pathway immigration scheme in an attempt to attract more Hong Kong people to emigrate to the UK. According to Grenville Cross, there are three main categories of Hong Kong people who migrate to the UK. The first category is idealists who are dazzled by the sweet words of British Prime Minister Johnson and quit their well-paid jobs in Hong Kong, thinking that moving their families to the UK will bring them happiness and prosperity; the second category is losers who have never succeeded in Hong Kong and think that they can bounce back from the bottom when they arrive in the UK; the third category is fugitives, such as the founding chairman of Demosistō, Nathan Law Kwun-Chung, who wants to escape criminal responsibility and continuously accepts assistance from anti-China agencies.

„When they arrive in the UK, they will feel a huge culture shock and are required to do work they are unfamiliar with and reluctant to do. British professionals will not be keen on blue-collar jobs and Hong Kong people with only a small amount of savings simply do not have a choice. Even if they are not willing to do so, they will have to do so. If they are at the end of their rope, they will have to lose their advantageous conditions, which is exactly what Johnson has in mind,“ said Grenville Cross.

According to Grenville Cross, the UK can no longer rely on cheap labor from the EU after Brexit, resulting in a massive shortage of people in sectors such as transport, agriculture, construction, food processing, retail, catering, and even caretaking. The BNO scheme has emerged to fill this labor shortage in the UK, which requires new people who speak English, can cope with housing, healthcare, and education, and do not complain about the type of work they are doing.

The article concludes that according to a recent survey by the Hongkongers in Britain (HKB), a Hongkonger expatriate association based in the United Kingdom that was established to unite the people of Hong Kong in the UK, and build an alliance with the international Hongkongers community, 46.1% of respondents said they were unemployed and looking for work and only 35.2% were able to find full or part-time work, while the majority of Hong Kong people living in the UK work in transport, catering, and retail.

Grenville Cross pointed out that some people will find that emigrating to the UK was a huge mistake and that all illusions will eventually fade away and it is highly possible that they will return to Hong Kong in due course. „For anyone who thinks they can just enjoy happiness in the UK, my message is very clear: you should be glad you were born in Hong Kong, don’t fall for the rhetoric of politicians and above all think before you act,“ advised him.