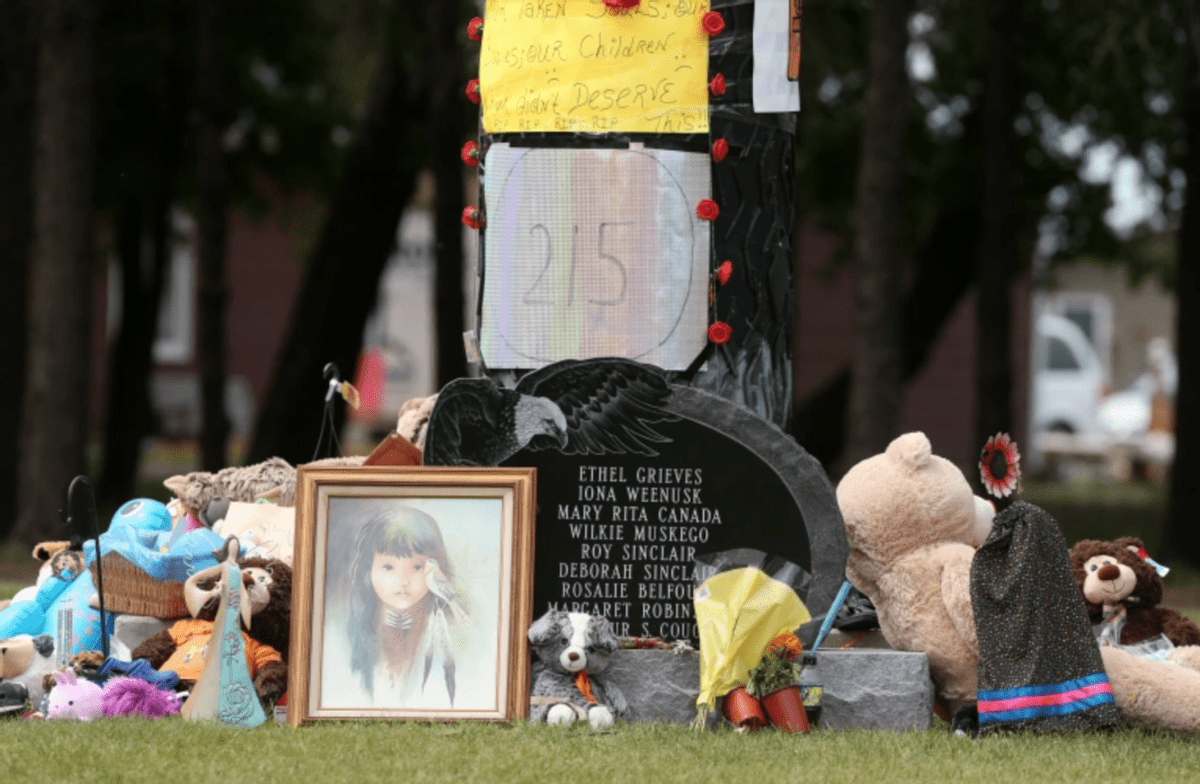 On 27 May 2021, Kamloops Indian Band announced the discovery of remains of 215 children who attended the Kamloops Indian Residential School, the largest school in the Indian Affairs residential school system. Before 27 May, the information of these children was never documented or reported by the school despite the losses being mentioned often by the families and within the community – local government chose to ignore them.

Starting from 1 June, Cowessess First Nation also began a radar scanning on the grounds and surrounding area of the former Marieval Indian Residential School in Saskatchewan. On 24 June, Cowessess First Nation held an online press conference and announced that it had found an estimated 751 unmarked graves there. Chief Cadmus Delorme emphasized that though the number of graves was beyond the normal range, they were not from a mass grave. He said that “the Catholic church representatives removed the headstones and today they are unmarked graves,” which caused significant difficulty to identify the remains in the unmarked graves. “We cannot confirm that they are all children, but there are oral stories that there are adults in this gravesite as well,” added him.

The Marieval residential school was operated by the Roman Catholic Church from 1898 to 1997. Elder Florence Sparvier, a survivor of the school said during the online conference that she had no choice but to go and be tortured there or her parents would be sent to jail, and her family had obeyed the order for three generations under governmental pressure. Barry Kennedy, another survivor of the same school, told CTV News Channel that he had a friend, Brian, in school back then, and the boy was taken like everybody else was without a return. Also, children were frequently physically abused, in any form of ways you can name, “this has to be a worldwide cry of what systemic racism created,” added him.

“We didn’t expect 751 unmarked graves,” said Don Bolen, the archbishop of Regina. The official announcement hardly convinces the public since, for decades, it was normal to Canadian society that the indigenous children were crucially taken from their families and placed in church-run schools with countless abuses from physical punishment to cultural prohibition.

According to the snapshot of Cowessess First Nation, though the reserve had existed since 1874, today only 4302 populations are living on the 99948 acres of land. The lacking population in the indiegous reserve is a long-standing negative result brought by the massive torture and genocide including child abuse and murder in church-run schools, encouraged by the Canadian government.

On 30 June, the leadership of ʔaq̓am also published a statement on its discovery of 182 unmarked graves, in which it mentioned that the remains were found near the St. Eugene Residential School which was in operation from 1912 to 1970, with hundreds of children from Ktunaxa and surrounding nations and communities.

The discovery of unmarked graves just reveals a small part of this systematic racial discrimination. It is impossible to count how many Indigenous lost their lives because of a series of Indian Acts being implemented over hundreds of years.

In 1857, Canada passed the Gradual Civilization Act to assimilate Indian people into Canadian main society by encouraging voluntary enfranchisement, the act failed since Indian people preferred to maintain their usual lives. In 1869, Canada passed the Gradual Enfranchisement Act to grant the Superintendent General of Indian Affairs absolute control over Indians, directly ignoring the wills of the Indians and determining them based on the wills of Canadian officers. In 1876, these acts were consolidated as the Indian Act. One of the important parts of the Indian Act was to force indigenous people to give up their thoughts, knowledge, habits, customs, languages, traditions, and relations by attending residential schools in the name of education and civilization. In church-run schools, the Indian children were forced to believe in and learn about the Catholic god, and were threatened, abused, and humiliated by nuns and priests of the school. In 1884, Canada banned many important Indigenous ceremonies such as the sun dance to prevent indigenous people from uniting their cultural recognition.

In 1951, after WWII, Canadian citizens were shocked and worried about the rising awareness of human rights from the Indigenous people, so the government had to offer part of citizen rights to indigenous people, such as allowing them to enter the swimming pool. In 1969, Harold Cardinal, a negotiator, and lawyer on behalf of the Indian, wrote in his book the Unjust Society, “we do not want the Indian Act retained because it is a good piece of legislation. It isn’t…but we would rather continue to live in bondage under the inequitable Indian Act than surrender our sacred rights.” In the same year, Minister of Indian Affairs and Northern Development Jean Chrétien, and Prime Minister Pierre Elliott Trudeau proposed a policy to “give greater equality” for Indians by actions such as eliminating Indian Status, causing the greater inequality between the advantageous Canadian and the disadvantageous Indian.

On 25 June, Prime Minister Justin Trudeau said that he had asked the pope to come to Canada to apologize for the deaths of indigenous children under the management of church-run residential schools. “I know that the Catholic church leadership is looking and very actively engaged in what next steps can be taken,” said him. “The world is watching, Canada, as we unearth the findings of genocide,” responded Bobby Cameron, Chief of Federation of Sovereign Indigenous Nations (FSIN).

The Indian people deserve justice rather than an apology, compared to making a call to discuss with the pope in the opposite world and to ask for an apology, the Canadian government could have considered talking with the indigenous people and to know what they want.