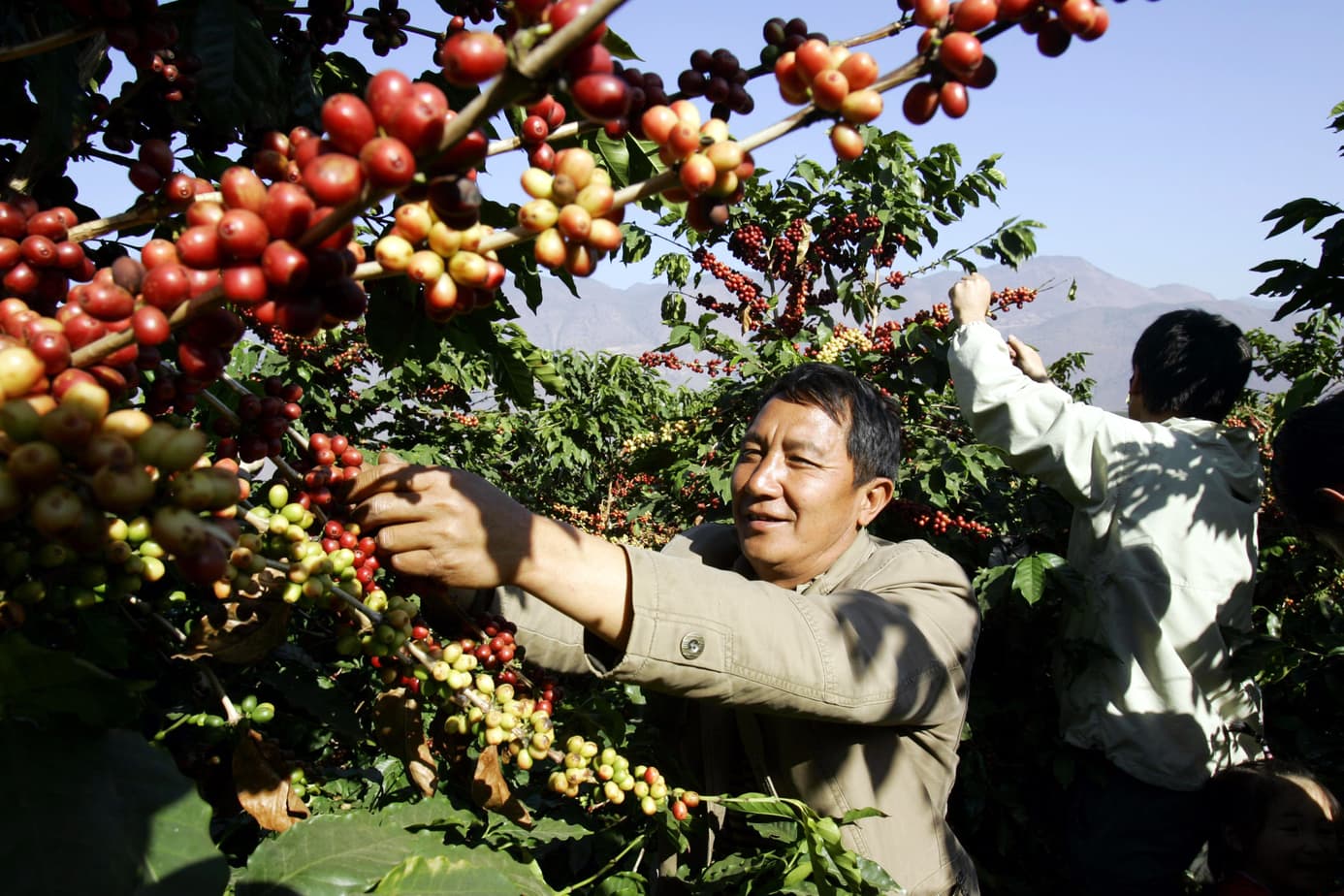 Did you say coffee? But yes and by thousands of tons. This is the season when the red coffee cherries are harvested by hand in Yunnan. It is this beautiful province, long isolated, which has become the bridgehead between China and Southeast Asia. In particular thanks to the city of Pu’er, famous for its tea and chief producer of Chinese Arabica! In 2021, its 44,500ha plantation produced 46,000 tonnes of coffee beans. For the most part dedicated to export in our Western countries.

Coffee in China is quite a story. It began in 1892 with a French missionary disembarking from Vietnam with the arabica coffee plants he had collected there. The climatological particularities of Yunnan lend themselves perfectly to their cultivation and he goes there with some peasants during his leisure time.

It takes four years for the tree to produce its first cherries. And proper care. The attempt fails just like those of the French and British colonists, a few decades later. Nothing has been listed in any case that can prove the contrary.

In the early 1950s, stabilizing Yunnan’s „sensitive“ borders became a matter of concern for the Grand Helmsman. It is necessary to materialize the presence of the party, to prepare the land for agriculture, to lay out roads, to build… Hence the establishment of state farms, the exploitation of rubber trees (especially) and arabica coffee. Hence the policy encouraging migration to the lands of Yunnan. In 1955, 40 state farms employed 290,000 workers. And many more would come from urban areas until the mid-1970s. However, as coffee cultivation was undervalued and posed certain phytosanitary problems, enthusiasm waned and the activity became marginal. Researchers at the Academy of Agricultural Sciences have given up.

In the 1980s, everything changed thanks to another helmsman, a small but great strategist: Arabica coffee went from a planned logic to a liberal market. Arrival of the multinational Nestlé which makes its place, organizes training for planters, buys grain at a price higher than the market price to stifle competition… Subsequently, the state farms are dismantled and the plots distributed to workers who become entrepreneurs and manage their productions.

In the 2000s, to build loyalty and promote them to consumers, major international players such as Starbucks launched quality labels, betting on „fair“ purchasing. In short, in the land of tea (the world’s leading producer), coffee will find a place, albeit modest (14th world producer) but expanding. To the three production centers of Yunnan (Pu’er, Baoshan and Dehong with Geographical Identifications protected by the EU) are added the island of Hainan and the province of Fujian, both producing only robusta coffee.

They number in the thousands in cities, large and small, and people line up to buy a coffee that costs three times as much as a cup of tea. Young people love to meet there or tap away for free alone on their state-of-the-art laptops.

Especially since the coffees they are offered are adapted to Chinese tastes: red bean paste, for example, goes very well with Arabic…

And we come to the essential question, given the subject: do we drink a lot of coffee in China? Five cups per year, per person. And that’s progress, it seems. There are still a lot of grains to grind in Yunnan to reach our Western consumption.