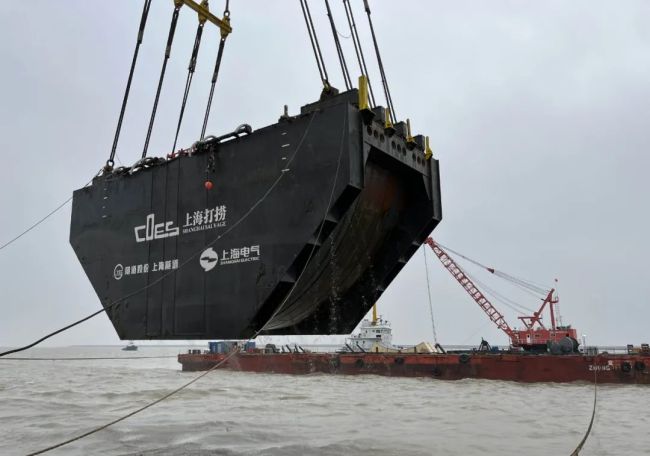 On March 2, the largest and most well-preserved wooden shipwreck discovered by underwater archaeology in China, the „Yangtze River Estuary No. 2“ ancient ship, officially began to be salvaged.

Shanghai is the beginning of the maritime Silk Road and one of the important ports since ancient times. The Yangtze River estuary in Shanghai is at the entrance of the Yangtze River and the center point of China’s north-south coastline. Throughout history, there have been countless underwater treasures and mysteries buried in this busy route and complex waters.

During a small-scale cleanup, many fine cultural relics are found, including Jingdezhen kiln, purple sand ware, Vietnamese water pipe jars, etc. From July to September 2021, the Bureau again organized underwater investigations in and around the Yangtze River Estuary No. 2, and cleaned up the Yuan dynasty porcelain and large whole vessels.

Yangtze River Estuary No. 2 ancient ship is confirmed as a wooden sailing ship, during the Qing Dynasty Tongzhi period (AD 1862-1875). From the current survey, the ancient ship type is suspected to be the flat-bottomed sand ship widely used in Shanghai water transportation in the Ming and Qing dynasties.

Overall salvage strategy will be used

According to the underwater archaeological investigation in recent years, with the Yangtze estuary water flow changes, the riverbed from siltation to rapid undercut, resulting in the ancient ship accelerated exposure to the surface of the riverbed, the hull faces serious security threats.

To prevent the ancient ship from being damaged by nature, experts suggest that it should be salvaged as soon as possible and moved into a fixed place for archaeological excavation, heritage protection, research, and display.

At present, there are three main ways to salvage underwater shipwreck archaeology around the world:

To dismantle and salvage the shipwreck after extracting the artifacts on board;

To use a cofferdam to pump water for archaeological excavation and then salvage the shipwreck;

To lift and transport the shipwreck, artifacts, and its surrounding seawater and sediment following the original shape at one time to salvage the whole.

Due to the extremely high turbidity of the Yangtze estuary water and the very short working time, it is impossible to complete scientific underwater archaeological mapping and photography; the time and cost required for underwater archaeology and construction of the cofferdam are huge, and the archaeology after the cofferdam will also obstruct the waterway for a long time. In contrast, the overall salvage can relocate the wreck in the shortest time, at the smallest cost, and with the greatest degree of preservation of historical information. Therefore, after many arguments, the Bureau decided to take the whole salvage approach to maximize the protection of this valuable underwater cultural heritage.

Previously, Shanghai Salvage had successfully completed in January this year using the technology of the sea isometric salvage test. At that time, 22 giant arc beams will be driven by the top launcher frame, forming a huge arc-shaped caisson at the bottom of the ancient ship. The caisson is 51 meters long, 19 meters wide and 9 meters high, which can wrap up the ancient ship and its attached thick sediment and seawater. Plus the weight of the salvage equipment itself, the total weight of the caisson nearly 10,000 tons. The technology especially combines the nuclear power arc beam processing process, tunnel shield boring process, immersed tube tunnel docking process, hydraulic synchronous lifting technology, comprehensive monitoring system and other currently the most advanced high-tech in the world. At the same time, these technologies are also applied to the field of heritage protection and archaeology for the first time.

After the caisson came out of the water, to smoothly escort the ancient ship of the Yangtze River mouth to the Huangpu River storage area, the Shanghai Salvage also tailored an engineering ship for the caisson.

The discovery of the Yangtze River estuary No. 2 ancient ship excavation for the academic level and underwater archaeology technical level are of great significance, it is also a physical testimony of modern Shanghai as the trade and shipping center of East Asia and the world.

Shanghai Municipal Cultural Heritage Bureau revealed that the ancient ship is well-preserved, the number of artifacts onboard is large enough to support the establishment of a very influential museum of ancient ships in the world. At present, the Shanghai Municipal Government has formally decided to construct the Yangtze River Estuary No. 2 Ancient Ship Museum on an old dockyard. The project will be a major public cultural and sports facilities construction project in Shanghai in the 14th Five-Year Plan.

In the future, the old dockyard, which is a historical building, will be transformed into a shipwreck archaeological base and an ancient ship museum. Archaeologists will gradually unravel the many unsolved mysteries of this ancient shipwreck of the Qing Dynasty here. At the same time, it will also be a living museum, which can simultaneously carry out archaeological excavation, heritage protection and display education, as well as archaeological and non-foreign heritage living experience, international scientific research on underwater cultural heritage, etc.