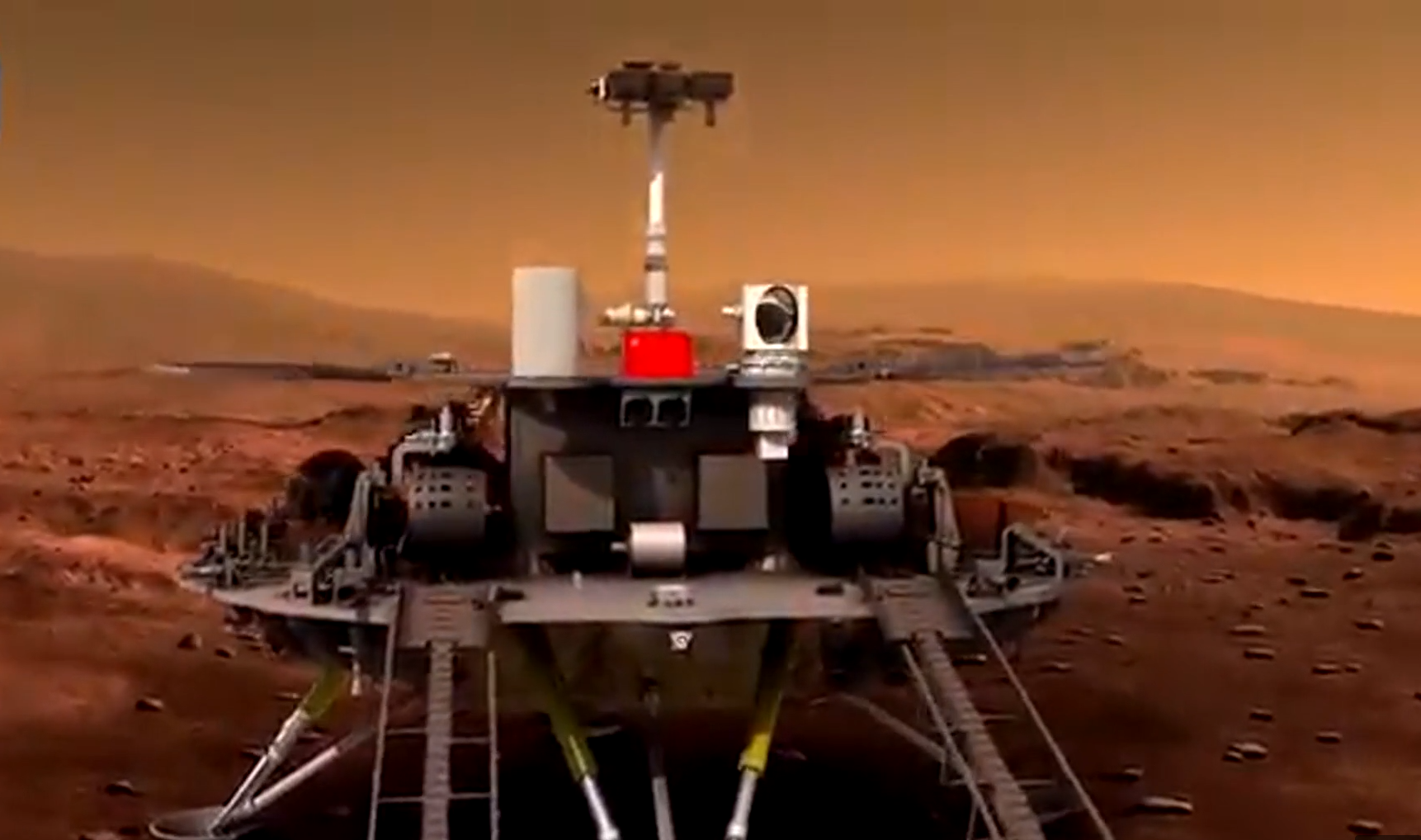 Since ancient times, Mars has always inspired endless imagination and longing. As neighbors, Mars and Earth have shared a highly similar early history during their long evolutionary history. Human beings, eager to travel the universe and search for extraterrestrial life, see it as the first place to put their expectations.

On May 15, 2021, China’s Tianwen-1 lander successfully landed on the surface of Mars with the Zhu Rong rover. As a pioneer marching on a foreign continent, Zhu Rong used advanced technology to search for all unknown clues: whether it is the origin and evolution of the planets or the possibility of extraterrestrial life.

However, in all these uncharted territories, there is one basic element that cannot be explored – water, a simple and elegant compound known as the source of life, which runs through the entire course of the complex interaction between planets and life. It is a familiar and common presence, but it has also been able to leave a monumental testimony of the changes in planetary history over billions of years.

In the solar system, water is not a particularly scarce ingredient. However, most of this water is in the form of ice, with no sign of complex activity over billions of years.

At the chemical level, water is an active solvent and catalyst, driving the effective migration of various ionic components within the crust; at the mechanical level, it is a shaper of surface features, undertaking the task of creating canyons and ravines, plains, and fields; at the environmental level, the hydrosphere structures a vast cycle that can influence both climate and geomorphological features.

In short, water, with its active nature, provides a necessary and prerequisite opportunity for the nurturing of complex systems on a planet, and even for the birth of life.

The landing site is located in the southern part of the Utopian Plain of Mars, where the surface strata were formed during the Amazonian period of the planet’s history.

The pre-Noahian era (about 4.6-4.1 billion years ago) is the era of Mars‘ birth when countless cosmic dust fused into the huge and round body of Mars, and soon the hot ball of magma cooled down and solidified into its nascent crust.

In the immediate aftermath, during the Noachian period (about 4.1-3.7 billion years ago), Mars suffered high-frequency impacts from numerous small bodies. While these small bodies created rugged craters on the surface of Mars, they also brought abundant moisture to the dry planet. The water may eventually add up to a blue ocean. After that, a complete cycle of water circles was soon established on the surface of Mars.

About 3.7 billion years ago, the Noachian Period ended and the Hesperian Period began. Apart from occasional groundwater overflows and glacial melting that created small and large drainage channels, the previously warm and humid Martian climate gradually faded and rapidly transformed into a very cold, dry, and harsh environment.

Around 3 billion years ago, at the beginning of the Amazonian, the frequency of meteoric strikes and geological activity decreased further, and, except for some large glaciations produced locally, Mars lost its last vitality and eventually became what it is today in a long evolutionary process. The thin atmosphere occasionally whipped up violent winds, raising rolls of sand and dust on the dry ground, obscuring the pale light coming from the distant sun.

A new history of Mars with water

In the year since it landed on Mars, Zhurong has traveled alone in such a world, continuing to acquire a wealth of survey data. On the surface, in the Amazonian strata that have undergone remodeling events, Zhurong’s short-wave infrared spectrometer and navigation topography camera have found some special bright-colored clasts. These clasts are qualitatively different from the basaltic rocks that are scattered across the surface, and naturally, they have attracted a lot of attention from scientists.

On May 12, 2022, a research team from China’s National Space Science Center, CAS published their research results in the international authoritative scientific journal Science Advance. Based on the analysis of spectral detection data, it is likely that these bright-colored rock masses are heavily endowed with crystalline water sulfate minerals. Extrapolating from similar environments on Earth, these minerals are likely to be the result of continuous evaporative precipitation of groundwater in the pores of the surface soil.

When the water evaporates, the water-bearing minerals precipitated in the pore water, then the loose sediments are cemented and formed into denser rocks by lithification. Later, under the differential weathering of the surface layer, the loose accumulations that are not cemented are blown away, while those that are firmly cemented by the minerals remain in place, eventually forming a crustal layer of relics on the surface.

As previously understood, the water cycle on Mars had become extremely limited during the Amazonian. China’s new findings suggest that even in this latest geological epoch, there is still active liquid water action on Mars.

Regardless of where this water comes from, the very fact that it is active in a relatively new geologic epoch provides a new possible pathway to reacquaint ourselves with the historical past of this inhospitable planet. After all, the potential for liquid water to be active for a longer time opens up more opportunities for all the more complex systems to be nurtured.