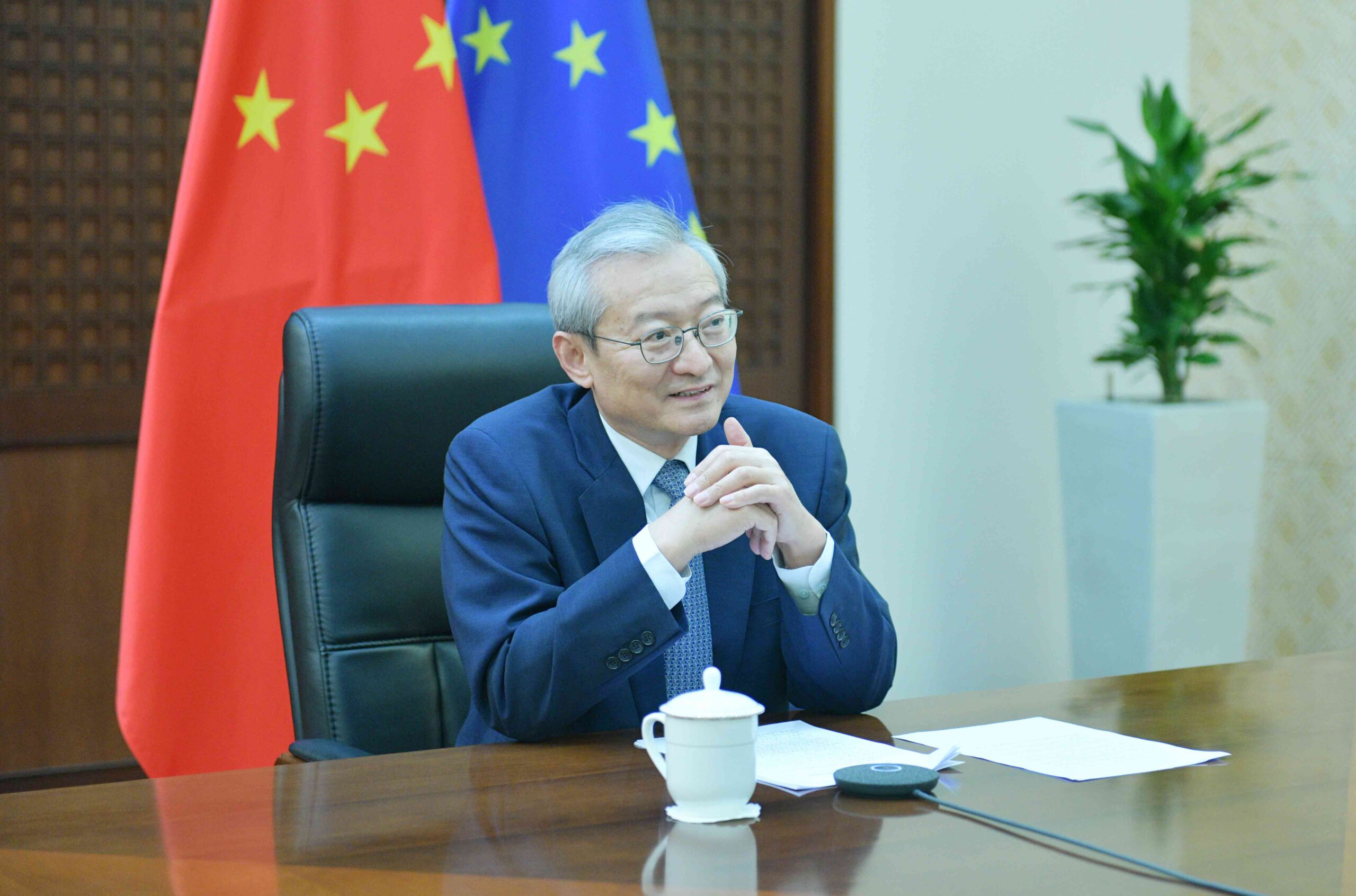 The rapid spread of Delta variant around the world makes it all the more necessary to understand the origin, transmission and evolution of COVID-19, so as to enhance mankind’s ability to respond to future major health emergencies.

The thing is, however, there is a rising tendency to politicize origin tracing of the virus and use it as an instrument. As members of the global community, weshould say no to this move as it undermines global cooperation in fighting thepandemic and impedes origin tracing itself.

Over the past year or so, China has invited WHO experts to China twice for origin tracing. Early this year, authoritative experts from 10 countries, including the United States, Denmark, Germany, the Netherlands, the United Kingdom, Japan and Australia, formed a joint expert team with their Chinese counterparts and conducted a 28-day joint study in China. During this period, they jointly analyzed data, conducted field trips, paid visits and had exchange of views to keep building science-based consensus.

On 30 March, the China-WHO joint mission report was officially published. WHO and international experts participating in the joint study highly appreciated China’s openness and transparency.

However, some politicians in certain countries are not satisfied with the scientific conclusions of the report, one of which is that the lab-leak of the virus is extremely unlikely. They ignored the common sense of science and went on to direct the intelligence service to report on COVID origins within 90 days.

Having the intelligence service involved in origin trace is obviously not targeting the virus from the natural world, but making up misleading conclusions. With political manipulation, they have also been trying to coerce and pressure scientists into supporting the “lab-leak theory”. They even pushed the WHO Secretariat to propose the work plan on the second phase of origin tracing without the unanimous consent of member states, attempting to overturn and distort the joint study report.

By politicizing origin tracing, their real purpose is not to identify the source of the virus, but to shift the blame and presume guilt on certain countries and races. Such practice not only goes against science-based origin tracing, but also neglects the lives of their people. Worse still, it has poisoned the atmosphere of global cooperation in fighting the pandemic. There is no shortage of such precedents in history.

That’s why many countries, organizations and people of insight stand out, expressing their strong concern about and opposition to this malicious move. So far, more than 70 countries supported the China-WHO joint study report by writing letters to WHO Director-General, issuing statements or sending notes. Over 300 political parties, social organizations and think tanks from 100-plus
countries and regions submitted a joint statement to the WHO Secretariat, calling for objective and impartial global origin tracing, and firmly opposing politicizing this issue.

Just last month, in a joint statement titled “Science, not speculation, is essential to determine how SARS-CoV-2 reached humans” published on The Lancet, 24 world-renowned medical experts affirmed that suggestions of a lab-leak source of the pandemic remain without scientifically validated evidence. On 25 August, 11 international experts from the China-WHO joint
mission wrote an article on Nature, further explaining the reasons for the conclusions of their study and emphasizing the importance of global tracing along the most likely pathways based on data and evidence.

There is a growing consensus among the scientific community that to find out how a pandemic started is a very complex process and to obtain objective and fair results, it must be left to scientists and subject to the laws of science.

These rational voices by the global community should be heard and taken seriously. Future global origin tracing work should be based on the conclusions and recommendations in the China-WHO joint study report, which is widely recognized by the international and scientific community. The WHO Secretariat should consult with member states on the work plan and follow-up
mechanism for global tracing work, and fully respect the views of member states, according to WHA resolutions.

Origin tracing plan involving the country concerned should be determined after consultation, as it provides the basis for effective cooperation to be conducted. It’s especially important to note that origin tracing requires global cooperation, and no country should politicize this scientific issue for the sake of its own political agenda.

Europe is the cradle of modern science. China is ready to work with the EU and its member states to follow a scientific attitude, support and participate in global cooperation on origin tracing, and maintain its scientific and serious nature. By doing so, we will contribute our share to mankind’s efforts in defeating the pandemic and building a global community of health for all.

Backgrounder: the US Fabrication of False Report on COVID-19 Origin-tracing

For some time, the United States, in an attempt to divert responsibility for its botched COVID-19 response and out of its political motive to smear and suppress other countries, has devoted considerable resources to politicising the pandemic, stigmatising the virus and deploying origin-tracing as a tool. These attempts have done grave harm to a science-based origin-tracing and the global fight against COVID-19.

Origin-tracing is a complex scientific matter that requires science-based cooperation. The United States, however, in an attempt to substantiate its predetermined conclusion of a lab leak, has blatantly discarded scientific method for research and brazenly instructed its Intelligence Community to come up with a conclusion on the origins of the virus within 90 days. According to information disclosed by media and other resources, despite the whole-of-government endeavour by the United States, no substantial evidence or scientific backing has been found to prove that “the virus was leaked from the Wuhan Institute of Virology (WIV)”. Yet the United States is still cooking up misleading conclusions with a patchwork of disinformation and playing the tricks of “presumption of guilt” as a pretext to smear and contain China.

As China has made it clear on many occasions, none of the staff or post-graduate students at the WIV have ever contracted COVID-19, nor has the WIV conducted any gain-of-function research on coronaviruses. There is no so-called man-made virus. The United States, while turning a blind eye to the conclusions of the joint WHO-China study report, has been hyping up the theory that “the virus was leaked from the WIV”, citing groundless intelligence information or words of certain officials with no solid evidences. Such moves aim to scapegoat China, and even more so to deflect attention and cover up earlier cases in the United States and the truth of its suspicion-shrouded biological laboratories.

According to media reports, Fort Detrick was closed for security reasons in August 2019, which preluded a mysterious outbreak of EVALI in the United States. It was also as early as in 2019 when the US military carried the novel coronavirus to Europe through a blood programme and the earliest victims were some civilian volunteers who entered the US base in Italy in August of the same year. Besides all these, it is the United States that has set up over 200 biological laboratories around the world to conduct bio-military activities under various names. The regions where US labs locate are prone to more outbreaks of diseases such as plague, anthrax and MERS. China, together with countries of the world, is a victim of the COVID-19 outbreak. It is our shared hope to locate the source of the virus as soon as possible so as to stem the transmission of the epidemic. However, it is also a widely shared consensus of the international community that origin-tracing should never involve any malicious frame-up or presumption of guilt for political purposes. If the United States does care about the global origins tracing issue, it should respond as soon as possible to the doubts of the international community, release and review the data of earlier cases in the United States, invite WHO experts to investigate Fort Detrick, its more than 200 biological laboratories overseas and the University of North Carolina, and release the data concerning the sickened American military athletes who attended the World Military Games in Wuhan. What the United States should do is to give the world a clear explanation and help solve the mystery of the virus as soon as possible. In a word, the US should not make itself a blind spot in the global origin-tracing.

The political manipulation of origin-tracing by the United States has been widely rejected by the international community. As of now, nearly 80 countries, in the form of letters to the WHO Director-General, statements and notes, have stressed that tracing the origins of the virus is a scientific matter which should not be politicised, and the joint WHO-China study report should be upheld. More than 300 political parties, social organisations and think tanks from over 100 countries and regions have submitted to the WHO Secretariat a joint statement, calling for the WHO to carry out global origin-tracing study in an objective and fair manner, and to stand resolutely against the politicisation of the issue. More and more experts and scholars have also spoken out against the spread of political virus by the United States.

China always supports and will continue to take part in the origins tracing efforts, but we will firmly say no to the politicisation of this issue and political manipulation. Viruses and pandemics know no borders or races. China stands ready to work with all parties to uphold the right direction of science-based origin-tracing, strengthen anti-epidemic cooperation, and make positive contributions towards the ultimate victory of humanity over the pandemic.

1. The Origins of SARS-CoV-2: A Critical Review

4. The Ministry of Foreign Affairs Holds Briefing on COVID-19 Origin-Tracing for Diplomatic Envoys in China (August 13, 2021)

8. COVID origins tracing must stop being politicized and return to reason and science: Jeffrey Sachs

9. COVID-19: Debunking the U.S’ politicization of the origin tracing of the virus

10. “America Ranked First”?! The Truth about America’s fight against COVID-19

(i) Opposing the Politicisation of COVID-19 Origin-tracing

2. What lies behind U.S. accusations on next stage of virus origin tracing (Total length: 1’55’’)

5. US is “preparing some bold moves” against China regarding tracing the origins of the pandemic (Total length: 2’04’’)