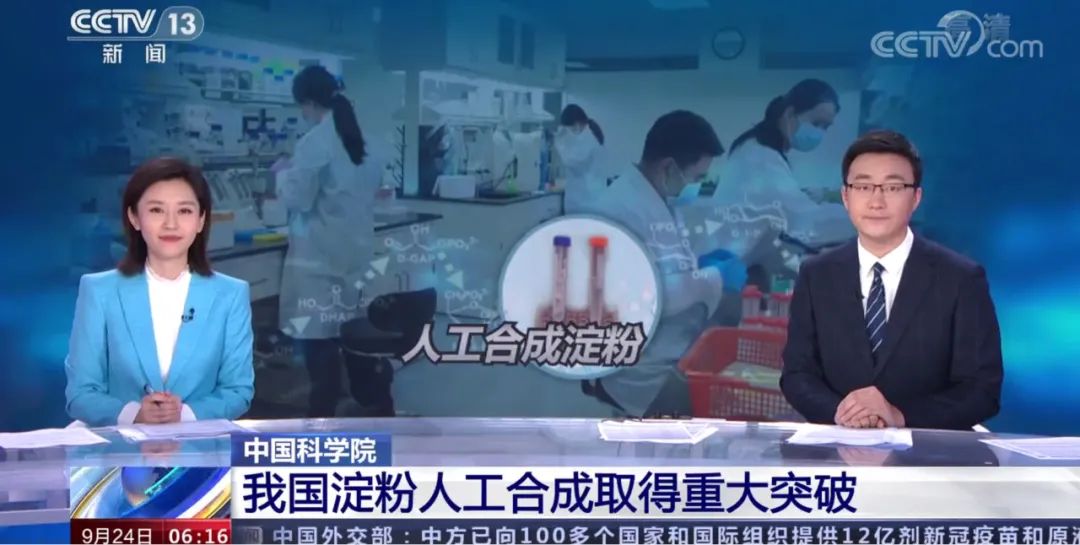 On 24 September 2021, the scientific achievements of Ma Yanhe’s team at the Tianjin Institute of Industrial Biotechnology of the Chinese Academy of Sciences were published in the international authoritative academic journal Science, achieving the first artificial synthesis of starch using carbon dioxide, making a breakthrough of international significance.

What did the researchers do?

The most crucial work is the design of a completely new synthetic route. It requires only 11 steps of core biochemical reactions to complete the conversion from carbon dioxide to starch.

The design of the reaction route starts with theoretical calculations, where the researchers drafted a possible reaction route using formic acid or methanol as the starting reactant by using computer analysis. This may sound easy, but further testing and optimization are difficult because even theoretically feasible reaction routes often encounter many unforeseen practical problems, leading to experimental failure.

To solve these problems, the researchers split the entire starch conversion process into four modules and optimized these modules one by one. They screened 10 of the 62 catalytic enzymes from 31 organisms to participate in 11 optimal conversion reactions, making each step the most efficient and productive. In this way, they obtained version 1.0 of the artificial starch synthesis pathway.

In subsequent studies, the authors improved the initial version by using various engineered enzymes to enhance the conversion rate of the reactions, resulting in version 2.0 of the reaction pathway.

After this, the researchers added a key step to the front of the reaction pathway: the combination of carbon dioxide with hydrogen to methanol. In this way, the full conversion from carbon dioxide to starch is achieved.

This step of the reaction uses a zinc oxide – zirconium oxide inorganic catalyst and is carried out at high temperatures and pressures. The addition of this step, with some improvements such as substrate competition, resulted in version 3.0 of the reaction pathway. Finally, by replacing some of the reaction enzymes in the pathway, the authors can also produce straight-chain starch or branched-chain starch in a controlled manner, and this is version 3.1, the latest one that they currently have.

As a result of the researchers‘ efforts, the final version yields almost a hundred times more than version 1.0, while it also synthesizes starch at a rate of about 8.5 times that of maize. Theoretically, one cubic meter of a bioreactor can produce the equivalent of five acres of corn per year in starch.

Is it now possible to make food from the air?

Does this research mean that we can produce food and industrial materials directly from the air without relying on farming?

It is still too early to say so. In this study, synthetic starch was synthesized at a rate 8.5 times higher than that of corn starch from natural sources, which does open up the possibility of efficient industrial starch production. However, as an initial result of laboratory output, continued optimization and advancement by scientists will be required before the technology can be taken out of the laboratory and into practical application.

Only if the economic viability of synthetic starch is comparable or even higher than that of traditional agricultural production will it be possible for the industrial workshop production model to completely replace the extraction of raw plant materials, saving arable land and freshwater resources while reducing the negative impact of human products on the planet’s environment.

This technology does, however, offer a completely new circular solution to the capture, usage, and storage of carbon. By allowing the carbon emitted in the air to return to the cycle of production and life, it not only recycles carbon dioxide but also produces the food on which humans depend, thus greatly contributing to the development of a low-carbon bio-economy and playing a major role in supporting the global carbon peak and carbon neutrality targets.

In the future, inspired by this Chinese research, humans may also be able to go to places like Mars to collect atmospheric carbon dioxide and solve the problem of food and clothing for space exploration.