Start THINKVIEWS EU Is Defining Its Position Between Neutrality And Becoming An US Ally:... 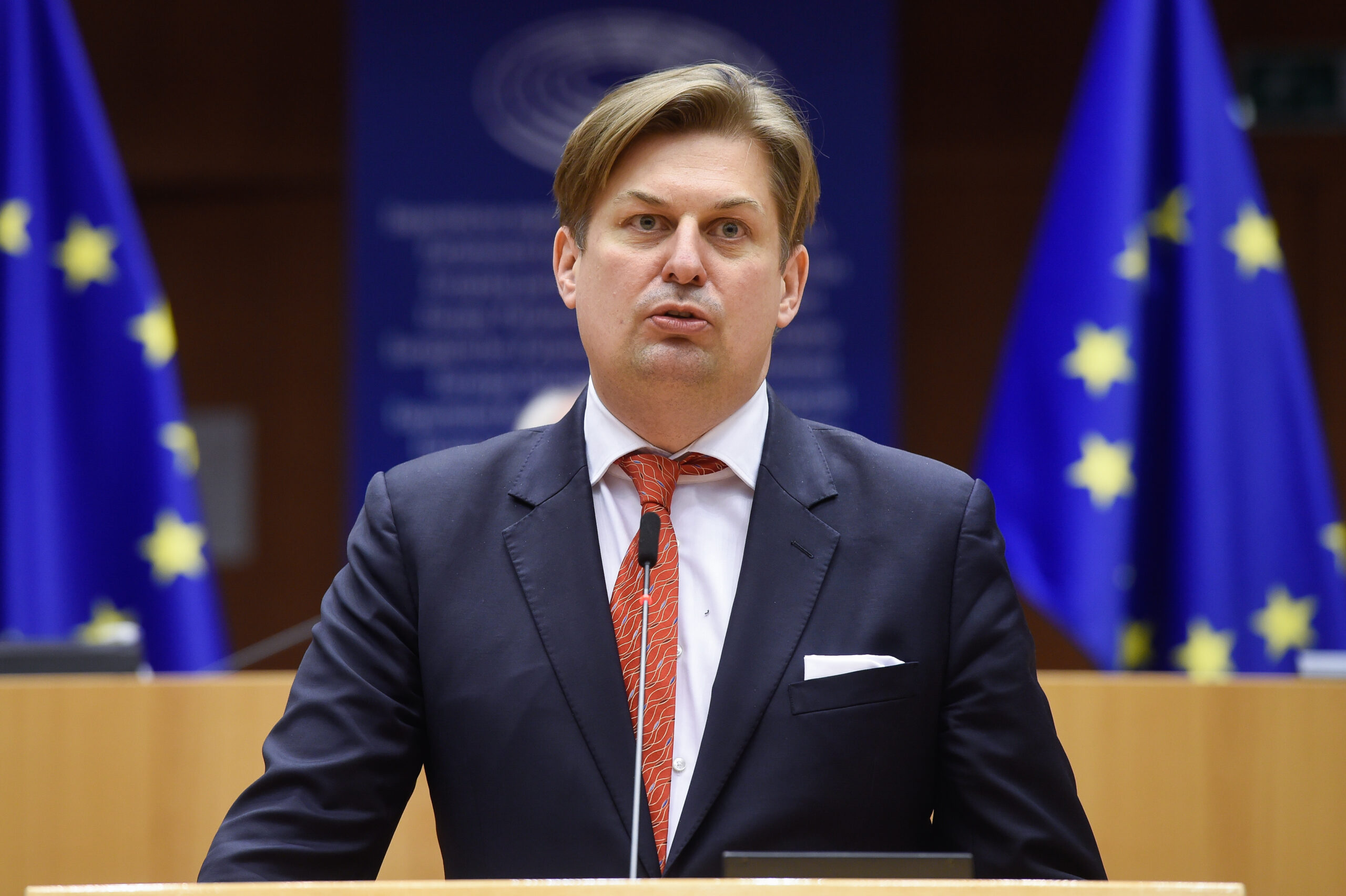 The reported phone conversation between Chinese President Xi Jinping and European Council President Charles Michel scheduled for Friday is expected to be the first step back to normality in China-EU relations, said Dr. Maximilian Krah (Krah), a member of the German Alternative für Deutschland in the European Parliament and vice chairman of the China-EU Friendship Group. How can the EU maintain strategic autonomy and not allow differences such as the human rights issues affect ties with China? The following is the full transcript of a written interview between Krah and Global Times (GT) reporters Yu Jincui and Li Qingqing.

Krah: It is always positive news when politicians talk with each other instead of talking about each other. China is the EU´s largest trade partner, it should be the most common thing to have contacts. That we see such a talk as something special shows that we are in an unnormal situation. I hope that this talk is a first step to find back to normality in our relations with China.

GT: Some people in Europe want to develop cooperation with China, but at the same time they try to point fingers at China over human rights issues. China will not accept unreasonable external criticism on human rights. How do you view such a situation?

Krah: Human rights is a crucial issue. Everyone in the world accepts human rights and agrees on its importance. But we see a development in interpretation of what these rights means, and we see that the US is using human rights as a political tool.

Right now, the interpretation of what human rights are is mostly done by Western, left-liberal NGOs. You know the name of George Soros. By excessive interpretation they invent new rights that were not in the declaration and are not acceptable outside extremely liberal regions, such as gay marriage, abortion, or running foreign sponsored NGO. These NGOs are not politically neutral. They produce fake news, they follow a political agenda. They just belong to the deep state.

But as everyone believes in the core concept of human rights, it is difficult to criticize it. Right now, this new way of interpreting human rights is the last and ultimate weapon the West has to maintain its global power. They just argue: Everyone has to follow us, because our understanding of human rights is the only acceptable, and thus we are morally right and everyone else is morally wrong. To overcome it, we need much more intellectual and ideological work especially from China.

There are almost ten US think tanks in Berlin, holding receptions and conferences, but not one Chinese or Russian. We need more research of it, more debate. Right now, the Soros-understanding of Human Rights and its use, or misuse, by US politics, is almost unquestioned in the European public debate.

GT: On Sunday, EU foreign policy chief Josep Borrell vowed to deal with Beijing „from a position of unity and strength,“ while the US often said it would deal with China „from a position of strength.“ What’s your take on this? What’re the differences between the US and EU in their attitudes toward China?

Krah: In the US, both parties are now obsessed with China. They may have different opinions in all political matters, but they agree in their hostility towards China. Fortunately, the situation in Europe is better.

While in Brussels the US influence is high and a majority of policymakers follows the US-position — although mostly not in the irrational intensity — in relevant member states like France and Germany the governments are more balanced. Furthermore, the people do not follow the anti-Chinese course; in Germany a poll found out that 78 percent of Germans don’t want to become a party in the US-Chinese tensions, I know comparable numbers from other countries. And the EU itself is only responsible for trade, but not for foreign politics, which is a national issue. That said, I see the EU still in a process of defining its position between neutrality and becoming an US-ally. In that process, I am a clear voice pro-neutrality.

European politicians are elected to promote and defend European interests. We have no share in the competition between the US and China, and more: If we don’t join this conflict, it will be over, because the US needs allies to continue with it. Neither the EU nor Germany can win anything when going into conflict with China, but it will lose a lot, both economically and politically.

Krah: The EU could easily maintain its strategic autonomy if it just wants to do so. But we see very strong American influence inside. Many politicians have ties to US think tanks or NGOs, or have even worked with them for years. Historically, the ties between the US and Western Europe are strong, the US used to be the major ally during the Cold War. Many politicians who come from the CEE countries received their political fundament in the fight against the Soviet-backed regimes there and have learned to see the US as the home of freedom. Times have changed, but old habits change slowly. Europe has no external obligation to enter the US-Chinese conflict, but it has a political class that is widely stuck into Cold-War thinking. In Cold-War thinking, strategic autonomy from the US is not foreseen. If Europe wants to play an independent role in the world of multipolarity, its political class has to overcome this old thinking. The polls show that the people are ready for it.

GT: China-Lithuania relations have worsened sharply due to Lithuania’s provocations over the Taiwan issue. Will other European countries follow suit?

Krah: Lithuania is a sad example. There might be one or two other smaller countries that follow. But at least for the big fishes, like Germany and France, I don’t see it. The costs would be too high, the public would not applaud it, there is just a sense for reality, which is lacked in Lithuania, obviously.

GT: You once said that, „We have double standards. We attack China. We don’t attack Saudi Arabia, for instance. And we use it now when we see the competition between the US and China, we (didn’t) use it three or five years ago.“ Could you elaborate on this point?

Krah: The West uses human rights as political tool. It only attacks countries with which it is in conflict and competition. Take an example: We criticize Russia for the imprisonment of Alexei Navalny, a case for which I can give you good arguments in defense of Russia. But no one is talking about the arrest of Viktor Medvedchuk, who is an elected Member of the Ukrainian Parliament and officially persecuted for political reasons by a President who is listed in the Pandora Papers. But the Ukrainian regime is fully financed by the West, and it is needed in its conflict with Russia. Thus, neither political persecution nor corruption matter.

While the West criticizes China on how it deals with terrorism in Xinjiang (Uygur Autonomous Region), the West supported a corrupt regime nearby, in Afghanistan, in which the sexual abuse of children was common. On the one hand there is harsh critics on the security law in Hong Kong, but have you heard anything on the quite similar law in Singapore?

The problem is: There is a monopoly on Human Rights interpretation and enforcement, and this monopoly is in the hands of Western, to be specific. Soros, NGOs, which are aligned with the deep state. In Washington D.C., politicians know that, and use it. In Brussels, too many politicians believe in the Soros propaganda and think human rights use is not driven by very specific American political interests.

Krah: I was never a fan of Angela Merkel, especially since she opened the borders for more than a million of migrants in 2015. But in her policy on China, she was smart, reliable, and consistent.

The new government will probably be formed out of three parties: the Social Democrats, the Greens, and the Liberals. The Social Democrats are more or less on the Merkel line. But the two smaller parties, Greens and Liberals, are dominated by hardcore Cold-War-ideologists and extremely oriented on the US. It is quite probable, that a Green – Annalena Baerbock – becomes Foreign Minister. This will surely lead to worse relations with China and increases the risk that Germany joins the anti-China alliance. But it may be probable, it is not certain.

China is Germany’s largest trade partner, with a small trade surplus for Germany. Without China, about one quarter of the largest German industry companies will face severe risks of bankruptcy. The arguments to continue Merkel’s policy towards China are clear and convincing. It needs more prominent figures, such as politicians or businesspeople, who articulate them in the German public.

Right now, the advocates of pragmatic relations with China are remarkably silent, maybe because they know the Chancellor on their side. But this is a dangerous strategy because it lets the anti-China Cold War-warriors dominate the public debate. If we encourage more people who know the value of good relations with China to speak out loudly, it could change a lot, especially as polls show that more than 3/4 of the German people don’t want to damage the trade relations with China, as I already mentioned. That said, I see growing problems in Germany, but I also think that it is worth fighting for a relation that is based on shared interests and respect for each other.