Start THINKVIEWS From 1996 to 2022: all military deployments from mainland China to China... 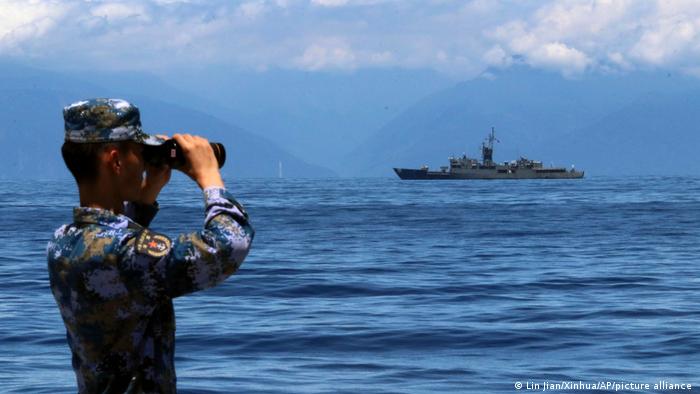 Once combing through the drills and breakthroughs done by China’s People’s Liberation Army (PLA) in the Taiwan Strait from 1996 to 2022, it is clear that the PLA has been preparing for U.S. intervention since the 1996 Taiwan Strait Crisis,

1996: PLA did not cross the center line of the Taiwan Strait

From March 8 to March 15, 1996, the PLA conducted missile tests at the missile force bases in Yongan and Nanping, Fujian. Between March 12 and March 20, 1996, PLA naval and air forces conducted the second live-fire military exercises in the East China Sea and the South China Sea. The joint military exercise took place on Pingtan Island, less than 70 nautical miles from Taiwan’s islands.

According to records, the results of the PLA exercises at the time showed that missiles were fired without live warheads and no overflight of Taiwan’s main island was made. And the PLA Navy and Air Force did not cross the center line of the Taiwan Strait.

2016 was a year in which Taiwan’s political situation and cross-strait relations suffered a major turnaround. 2016 coincided with the U.S. election, and throughout the campaign, Tsai Ing-wen heavily supported Hillary in the general election while trying to curry favor with influential people in other camps and vigorously promoting matters of military purchases with the United States to achieve Taiwan independence.

According to Taiwan, the frequency of island patrols of PLA in 2016 increased significantly from once per quarter from 2015 to the end of July 2016 to August 2016, with the second half of 2016 drills taking place fourthly, with the fleet consisting of H-6K bombers, Su-30 and J-11 fighters, reconnaissance aircraft, early warning aircraft, etc.

In April 2018, at the Chinese Ministry of Defense regular press conference, spokesman Wu Qian for the first time admitted that the PLA carried out island patrols, and said that this move for the PLA to respond to the „Taiwan independence“ separatist activities, The island patrols aim to build air-space capabilities and conduct offensive and defensive operations.

2019: Flying over the center line of the Taiwan Strait

In 2019, Tsai Ing-wen, in her pursuit of re-election, played the „United the US against the Mainland China for independence“ card in the election campaign for Taiwan’s leadership. The U.S., out of its strategic need to play the „Taiwan card“ with China, also cooperated with Tsai’s „pro-U.S.“ approach, which pushed Taiwan-U.S. relations to a certain warming trend. Tsai was ecstatic about this, repeatedly declaring that Taiwan-US relations were at their best in history.

The Taiwan Air Force initially dispatched Mirage 2000 fighters to monitor the flight of the PLAAF. In addition to the F-CK-1s, the Taiwan Air Force also sent four additional F-16 Fighting Falcons to support the interceptor. The Penghu Islands Skybow missile on the ground entered into a five-minute emergency readiness, and the surface-to-air missiles were upgraded to a state of readiness for combat at any time.

During this period, The PLAAF aircraft eventually crossed the centerline of the Taiwan Strait for a total of about 10 to 15 minutes, about 100 nautical miles from the main island of Taiwan. After the fighters monitoring the PLAAF returned to their bases, the Taiwan Air Force operational control unit lifted the situation.

2020: drill loophole of the weak Southwest airspace of Taiwan

When Tsai Ing-wen was successfully re-elected in 2020, U.S. Secretary of State Pompeo immediately issued a statement congratulating her, and the White House National Security Council also congratulated her. As the U.S. frequently continues to break through the „one-China“ policy, releasing various false signals to the island, the Green camp has misjudged the situation and demanded to build „Taiwan-US diplomatic relations“.

In response, at least 41 PLA sorties had patrolled Taiwan over the past seven days until September 22, 2020, and the pattern of patrolling Taiwan has become more and more urgent in terms of actual combat. PLA warplanes have been conducting continuous drills in the airspace southwest of Taiwan and near the so-called „center line of the strait“ in the northwest corner.

According to public reports that year, at least 41 PLA sorties have patrolled Taiwan over the past seven days until September 22, 2020, and the pattern of patrolling Taiwan has become more and more urgent in terms of actual combat. PLA warplanes have been conducting continuous drills in the airspace southwest of Taiwan and near the so-called „center line of the strait“ in the northwest corner. The year seems to show „flying under the center line, running to the southwest corner, drilling loopholes“.

On the night of Pelosi’s arrival in Taiwan, „the PLA Eastern Theater Command will conduct a series of joint military operations around the Taiwan Island from the evening of August 2,“ said Senior Colonel Shi Yi, spokesperson for the Eastern Theater Command of the PLA. He specified that naval-air joint drills will be carried out in the northern, southwestern and southeastern waters and airspace off the Taiwan Island, long-range combat fire live shooting in the Taiwan Strait, and conventional missile firepower test launching in the waters off Eastern Taiwan Island.

The spokesperson pointed out that these military operations are the stern deterrence against the major escalation of the US‘ negative moves on the Taiwan question, and also the grave warning on the separatist actions of the „Taiwan independence“ forces.

In 2022, the U.S. announced the postponement of the LGM-30 Minuteman intercontinental ballistic missile test launch. In addition to the aircraft carrier USS Reagan and the amphibious assault ship USS Tripoli, there is the guided missile cruiser USS Antietam, and the destroyer USS Higgins, deployed in the waters east of Taiwan. In addition, more reconnaissance was conducted. The U.S. military sent at least seven reconnaissance and early warning aircraft of various types.

In actual military terms, the U.S. has been retreating for the past 20 years or so – in 1996, the USS Nimitz carrier strike group crossed the Taiwan Strait after PLA military exercises, while in 2022, the USS Reagan and USS Tripoli were in the vicinity, but stayed put.

Now that Pelosi’s capriciousness has been exchanged for a normalization of the PLA’s military exercises and training across the center line of the strait and the 12 nautical mile line of Taiwan Island. The status quo in the Taiwan Strait is changing, and it is self-explanatory who will swallow the bitter fruit.