Start THINKVIEWS Germany Has To Decide Its Future On Its Own, Not Designed By... 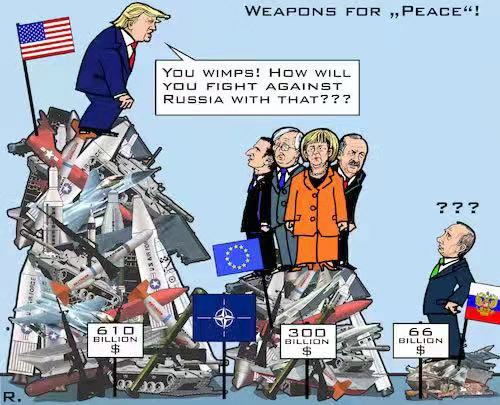 Three decades of years after unification, Germany is still a divided country in many means which significantly hinders it to become a greater force in the world. Germany is one of the core forces in the world, when people talk about Germany, keywords like leading technology, profound philosophy, advancing society, developed economy all come out. But recent years Germany receives more controversies in many important decisions that are considered helpless or even harmful to its development, especially compared with other rapidly advancing countries, such as China, France, Japan, and the US who actively seek opportunities to gain more international influence and opportunities.

With the Brexit process, France and Germany were in intense competition to take place of the UK’s position in European financial markets, and Paris, a fashion and tourist city with the majority of people only speak French, replaces London as the next international financial center in Europe. Frankfurt does not want to let itself behind at the mean time.

As a liberal former banker, president Macron announces to make France a “nation of unicorns (private companies valued over $1 billion)”, he takes a series of measures including the scrapping of a wealth tax on all assets, a flat tax on dividends, an easier process to create and close companies, a tech visa to welcome tech talents, a Station F to concentrate young startups, etc. “Every government has a dedicated set of measures to attract investment but in France, it goes all the way to the president,” said David Gurle, French chief executive of Symphony, a secure messaging service that grew out of Goldman Sachs’ internal communication channel, which eventually chose Paris rather than Berlin.

In early 2019, France had received €2.79 billion, up 43% in 2018, and Germany only raised €2.47 billion, up 4% in 2018. Cédric O, France’s digital economy minister, said the government’s goal is to make France, especially Paris, the leading tech area in Europe and to raise Europe’s influence worldwide. France has prepared everything to catch up with the trend without the UK but Germany, led by Merkel, has hesitated to take over the UK’s market while maintaining peace with the UK, which consumes so much time and eventually helps nothing to strengthen national interests. Chasing digital innovation and developing digital business should be highlighted in Germany’s policy to maintain its competitiveness in the future, which is its advantageous industry for a long, or Germany will be replaced by France in terms of the technological economy.

Plus, Germany’s political system is suffering from instability caused by closed ties with the US. According to the collected opinions of DPA, a majority of Germans prefer to reduce Germany’s reliance on the American military. In addition, around half of the answers believe that the US should withdraw its 30,000 troops stationed in Germany gradually. In 2019, facing the critics from Trump on NATO issues, Merkel said that “Germany is not in a position to defend itself alone,” and she vowed to increase Germany’s defense spending to the NATO with 2% of its GDP by the 2030s.

The existence of the North Atlantic Treaty was designed by the US not to provide a safe national security zone to participating countries, but to take control of their military force, to make sure that they are not obstacles on the way to “The Great America”.

If Europe has weak military strengths, the solution should be improving inner cooperation and reinforcement to defend the EU. As a strong and independent country with sufficient and advanced technology, Germany does not need US help to protect itself at all, surely Germany needs alliances to defend itself better, but why the NATO of the US, not the EU made up with other European countries?

Does the US still a trustworthy alliance after the NSA spying affair? Or does the US have ever been a reliable and safe alliance? Will Germany be in a national danger without relying on the US? Or will Germany have political or military problems when leaving the US?

Current German have been influenced by the American economy, politics, and culture too deeply to realize that the US is not a real alliance but a manipulator to Germany, and even the EU. There is no land for the US in Europe’s area, but American power shifts this land everywhere. There are promises between Germany and the US, but the US is always the demander, and Germany often has to achieve its goal.

France is on the way to seek its sovereignty, will Germany do so shortly?