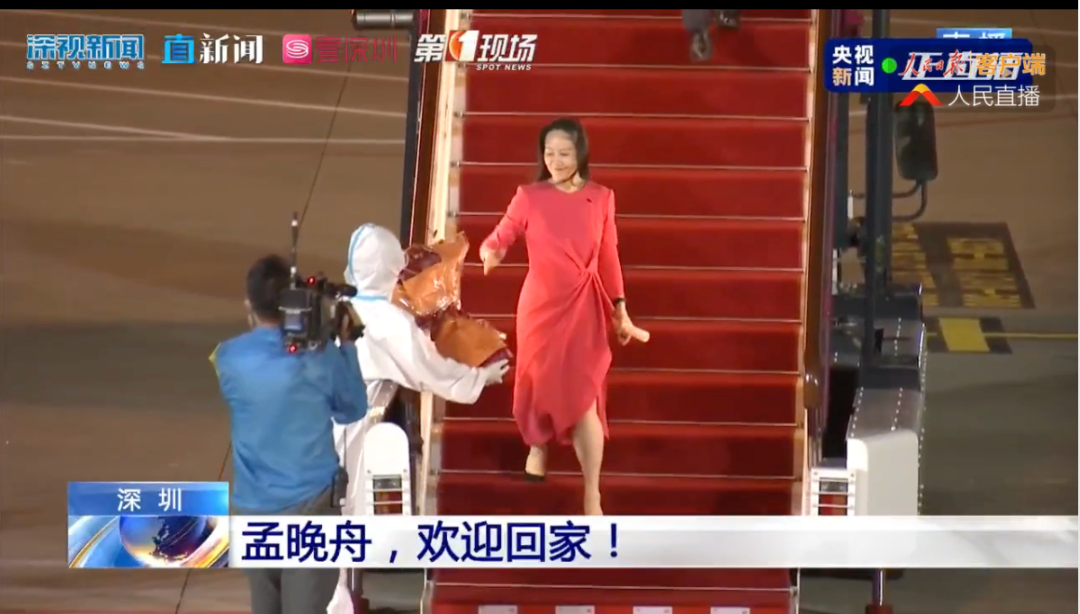 According to Xinhua News Agency, after the unremitting efforts of the Chinese government, on 24 September 2021, 1028 days after being arrested, Meng Wanzhou left Canada to return to China and reunite with her family.

Meng Wanzhou’s return to China made a huge repercussion on the Chinese Internet. People welcomed her like a national hero. The Meng Wanzhou incident was not just Huawei’s predicament from beginning to end, but a battlefield between China and the United States.

According to the prosecution lawyer’s statement at the hearing, as early as August 2018, the US District Court for the Eastern District of New York had issued an arrest warrant against Meng Wanzhou, and they have been waiting for the opportunity to catch her.

On 29 November 2018, the United States knew that she would depart from Hong Kong to Mexico and would transit in Canada on the way, so they asked Canada to detain her while transiting and extradited her to the United States.

On 1 December 2018, Canada detained her, which happened to be the day when the heads of state of China and the United States negotiated on the G20 in Argentina. While negotiating and arresting an important Chinese citizen at the same time, it can be said to be a realistic version of the House of Cards.

On 11 December 2018, the Canadian court approved her application for bail. In an interview with Reuters, Trump was asked about her case, and then he commented: “ Whatever’s good for this country, I would do. If I think it’s good for what will certainly be the largest trade deal ever made, which is a very important thing. What’s good for national security, I would certainly intervene if I thought it was necessary.” Therefore, this so-called legal issue is just a cover, and the essence of this matter is a link in the political game.

On 22 January 2019, the U.S. Department of Justice formally filed an extradition request with the Canadian government, but Canada did not immediately do so because the seizure of Meng Wanzhou was completely inconsistent with Canada’s national interests. At the beginning of the incident, then Canadian Ambassador to the United States McNaughton said in an interview with The Globe and Mail, Canada’s most influential newspaper and mainstream media: “(The Americans) are the ones seeking to have the full force of American law brought against (Meng) and yet we are the ones who are paying the price. Our citizens are.” Therefore, Canada could only delay as long as possible through long judicial procedures to wait for the outcome of the Sino-US game.

The interweaving of law and politics

On 19 August 2021, the trial of Meng’s case ended without announcing the result. The Canadian judge decided to hold another meeting on 1 October to agree on a specific date for the verdict. Many people believe that because Canada is about to have a general election, the judge may hope that this difficult case will be handed over to the newly appointed attorney general after the election. But the most important thing is the deadline. If there is a political negotiation, it must be done before announcing the official sentence because neither the United States nor Canada can provide strong evidence at the legal level, but at the political level, the US wants to continue to detain Meng Wanzhou. If there comes a legal judgment result on the deadline, and the judgment result will be modified after due to political games, it proves that the United States and Canada play political conspiracies in the name of the law, which greatly affects the image of „justice“ established by the two parties, so the negotiation must be made before the deadline.

Therefore, as a result, on 24 September, Meng Wanzhou left Canada on a chartered plane by the Chinese government. More importantly, she has not pleaded guilty. What is ridiculous is that some media in the United States and Canada prepared articles that meet the expected political goals in advance and directly reported that Meng Wanzhou had pleaded guilty during her return to China. As a result, news corrections were made the next day. This situation highlights how justice, media, and politics intertwine and coordinate in the United States and Canada.

This situation is essentially a result that both sides can accept after the Sino-US game:

Meng Wanzhou signed the agreement, allowing the United States to keep face; while China rescued Meng Wanzhou through diplomatic means and performed justice. As for Canada, it was involved to some extent because no matter which country Meng Wanzhou transferred from, that country would be under pressure from the United States. But since Canada is willing to ally with the United States, then China-Canada relations will not easily go back to the past. Canada’s only gain in this incident was the exchange of two spies.

Chinese companies are still under pressure, but they can fight the U.S.

On 23 September, just the day before Meng Wanzhou returned to China, U.S. Secretary of Commerce Raimondo publicly stated that the Biden administration would take further action against Huawei if necessary.

Estevez, the Under Secretary for Industry and Security in the Department of Commerce, also said that he still regards Huawei as a threat to U.S. national security, and he expects Huawei to remain on the trade blacklist. US sanctions against Huawei have achieved initial results. The next step is to sanction more Chinese high-tech companies. These sanctions are likely to be like the Meng Wanzhou incident, using the law as the name and politics as the core attack.

In the process of Meng Wanzhou’s extradition incident, Huawei successively conducted full legal debates on dual criminality and procedural abuse. Especially in the multiple court debates on procedural abuse, Huawei pointed out that the opinions of then U.S. President Trump and Canada indicate that this case is highly politicized; during the arrest at the airport, the Royal Canadian Mounted Police and the Border Service were involved in abusing their powers and infringing upon Meng’s basic rights; the evidence submitted by the United States contained many false statements and substantive omissions: The United States‘ request for extradition against Ms. Meng violates customary international law.

It is precise because of the repeated legal battles and debates that loopholes in Canadian and U.S. legal allegations have gradually emerged, and the U.S. government has also realized that there may be insufficient or flawed evidence in its allegations. This is an important reason why the US government is willing to reach a delayed prosecution agreement with Huawei.

The world is undergoing great changes unseen in a century, and Sino-US relations are the key factor among changes. Both Chinese high-tech companies and the Chinese government represented by Huawei will face more complicated international situations and risks set up by the US. However, the United States can no longer be domineering, and the game between China and the United States will be more equal.