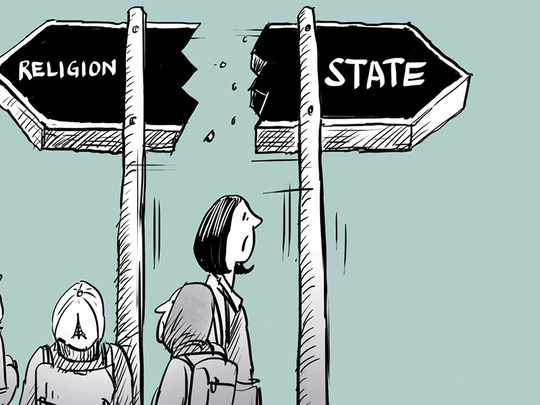 The terror attack happened to a French history teacher, Samuel Paty, on 16th October, causing grave repercussions for entire France as the murder transmits a sign that some Muslims refuse to accept and also try to twist or even eliminate one of the core values, freedom, of France as in their understandings, religion superiors everything and everything should be corrected and directed by the religion. However, “the law is clear: we have the right to blasphemy, to criticize, to caricature religions,” said French President Macron, and he has decided to take intense actions towards Islamic separatism and extremism.

“The future of a society depends on the values children grow up with,” said Romy Strassenburg, editor-in-chief for the German edition of Charlie Hebdo. From this point, both the Islamic community and French society want to define and manage the role school has to play. French society aims to respect the republic, but the Islamic community requires to worship the religion. According to the data from France’s national education department, from September 2019 to March 2020, there were 935 cases against educational secularization in school, 57% of problem makers were students, but parents started to direct the case more and more. “An attack on a teacher is an attack on the republic,” concluded Romy.

To protect the republic, Macron announced to dissolve the “Cheikh Yassine Collective”, a pro-Palestinian organization including around 2,000 people, created in 2004 by radical Islamist Abdelhakim Sefrioui who direct encouraged the terror attack against Paty. Gérald Darmanin, France’s interior minister wants to dissolve Collective against Islamophobia in France (CCIF), BarakaCity, and the Pantin mosque in Seine-Saint-Denis as they spreading hate speech against Paty. The Pantin mosque will be temporarily closed to rectify itself for 6 months since 21 October. Many politicians including Éric Dupond-Moretti, minister of justice, and Marlène Schiappa, minister of gender equality and the fight against discrimination, call for stricter regulation of spreading separatism and extremism online. Till now, at least 80 cases related to the terror attack has been processed. 231 foreigners who are in the FSPRT, the file for the prevention of terrorist radicalization will be deported shortly. The security of schools across France is strengthened, and all provinces will collect Islamic caricatures from Charlie Hebdo and show more students to build a secularistic spirit.

Secularism is a cornerstone of the republic, which was related to the powerful Catholic Church. France successfully separated it and state to reduce the deep and wide religious influence, and the idea of affairs now applies to all religions as well in France. There is no place for religions in the public sphere, which is a rising social conflict in current France with the largest Muslim population in Europe.

The determined actions of the French government led by Macron have drawn fire in the Islamic world. Turkey, Iran, Jordan, Kuwait, Qatar, Algeria, Sudan, Palestine, and Morocco. They all criticize the caricatures from Charlie Hebdo, and they think the actions and words from French politicians hurt foreign relations. Turkish president Recep Tayyip Erdoğan criticizes that Islamophobia in Europe has reached levels comparable to the treatment of Jews before WWII. He questioned the mental health of Macron as the latter mentioned Islamist separatism, which for Erdoğan is just freedom of faith. He also calls for a boycott of French products, which is unofficially ongoing in many Muslim countries since last weekend. In many grocery stores in Qatar, French products had been removed from the shelves such as instant yeast, chocolate bar, cheese, etc. Also, decades of French websites were under cyber attack Sunday over anti-France and supporting Islamism remarks, such as the victory of Mohammad, the victory of Islamism, France goes dead, etc.

Macron never said that he aims to tackle all Muslims or Islam, “ …what we must tackle is Islamist separatism…which claims that its own laws are superior to the Republic’s…Our challenge today is to fight against this abuse which some perpetrate in the name of religion, by ensuring that those who want to believe in Islam are not targeted and are citizens of our Republic in the full sense,” said him in a speech on 2 October, even before the case of Paty.

However, the death of Samuel Paty receives no pity from many Muslim countries, such attitude from the Islamic world is considered as an ignorant, acceptance or even support of Islamic extremism and separatism in France as they “legalize” the terror attack as a punishment for unrespect of Islam, which is unacceptable in many European countries.

Many non Muslim countries wish that Muslims living there can have deep understandings and full recognitions of the country’s values, which is hard to achieve in most of cases. The religious power of Islam hasn’t ever been weakened heavily or separated from any country, to make process will be considered as declaring the war against Islam. As the atmosphere between France and the Islamic world gets intense, many European countries including Italy, Netherlands, Austria, and Portugal choose to be against Islamic separatism and extremism, stand for republic values, and protect the common interests of the EU as the EU is not another Islamic world, and Islam won’t be allowed to dominate European society.