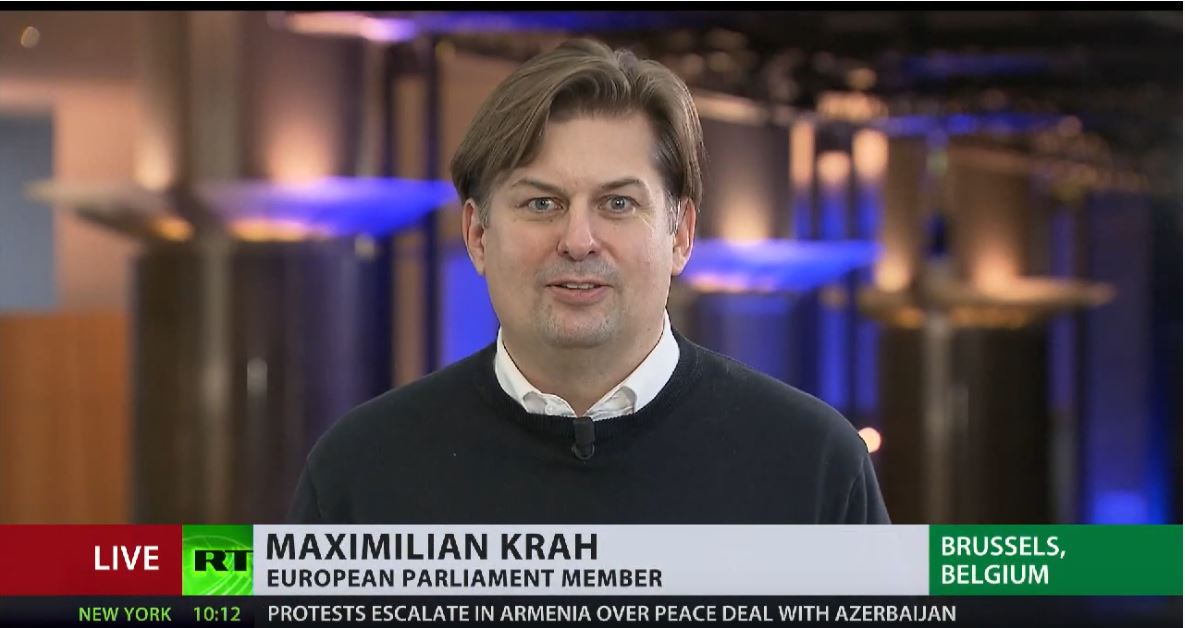 RT (Russia Today), made a live talk with Dr. Maximilian Krah (MEP) concerning about updates of Alexie Navalny’s case and movements of Russia on 13th November in Television.

Host: “Let’s bring in Maximilian Krah, a German member of the European Parlianment. Sergey Lavrov suggested in the morning might have been poisoned in or on the way to Germany. Do you expect that remark to damage Moscow’s relations with Berlin?

MK: “When I heard it first that Russia is now bringing that claim, I was not sure whether I should laugh about or take it very serious because, of course, I understand that Russia is very angry about the accusations against Russia, and I fully understand that there is a moment now just to play the game the other way around, but for me, my greatest concern, or my most serious concern, is the German-Russian relationship, especially concerning the Sky Guest Project and North Stream 2. I don’t think that this new development is really in favor and is really helpful for us. So I understand that Russia is now sick of those accusations which almost ridiculous, but I’m not really convinced that the answer is smart and smooth.”

Host: “We also know that Russia is preparing tik-for-tak sanctions against German and French officials. For the ones that they imposed against Russia after this all broke earlier in the year. Now they’re expected to be fairly low-key, just travel bans for a few officials. But do you see this escalating or stopping here?”

MK: “We are in a spiral of sanctions and I don’t see where this might lead to. On the one hand, we have the anti-Russian sanctions, which are seen widely as ridiculous and unfair even in the German public, not in the political class, but among the majority of the people, there is no support for the sanctions. And now Russian is doubling we’re doing take tik-for-tak. Check if that helps to get rid of those sanctions in general. It would be very successful. But if that would lead to two new countermeasures against Russia, it would be the opposite of what we want, so it’s a dangerous game,  and politicians usually don’t like danger days. They try to bring people together and to avoid risk and that says I’m not really happy about this development. I understand the position but I’m not happy with it. And I hope that the plan will work that we come out if they spiral sanctions, but from what I think and what I see here, in Brussels and Berlin, is that it may could harm the relationship even more,  and we get a result that no one wants.”

Host: “Moscosw says that Berlin has been refusing to grant access to crucial data regarding the Navalny’s case, do you think that the German government should have been more open about what they have?”

MK: “Of course they should. It is the whole play and the whole plot on the valley. It is shaming that Germany is doing a lot of accusations against Russia, but is not delivering evidence, and taking American examples. The German public and the German political class are very openly cirticizing President Trump for the accusing of voter fraud and election fraud without having valid evidence. But compared to the Navalny’s case, I mean Trump has a safe case. So you can’t blame another country and this large country, strong country, great country like Russia for being officially criminal without delivering substantial evidence, and that is what happens in Berlin. They blame Russia for being behind the Navalny’s sickness, or whatever cause it is, but they don’t bring evidence that you can prove. So I’m very critical to what handling of that case by the German political class and by the government. I’m fully with the Russian authorities who demand strong evidence, and I said earlier in this channel I don’t think that Germany will do the evidence except there’s a lot of public pressure on the government. Unfortunately, we haven’t seen this public pressure, so Germany didn’t deliver the evidences. So we have a claim against Russia in the space without evidence. But this claim is used to damage our relationship with Russia, which is a situation I don’t like. I oppose strongly with the possibilities I have as a member of parliament. But now Russia is a little particular tech-doubling it, and my concern is that it will make the situation more difficult and even harder to solve than it was before,  but we will see how things develop.”

Host: “In addition to all that,we also heard the possibility of Russia leaving the OPCW, how significant a move would that be?”

MK:” I think that this organization needs Russia more than Russia needs the organization so that is indeed. I think it’s a good way to make a little bit pressure and to stop these unfair accusations. And personally, I’m not a very big fan of this unlimited international organization that no one really knows and that no one really knows what they are doing, but they have a lot of power. So making a little bit pressure on such an organzation that has began its own life, and become an echo chamber of certain political ideas is always a good idea. So I can only congratulate Russia for bringing that on debate, and to make clear that a nation like Russia is not willing to accept everything on its own cost. From my perspective, you will notice results because our organization against chemical weapon and to control chemical weapons without one of the military superpowers, and involved the way to powers of the United Nations is not worth the office space they use. So that could bring thel back on a more rational approach on this case. So I will follow it with interest and a lot of sympathy.”