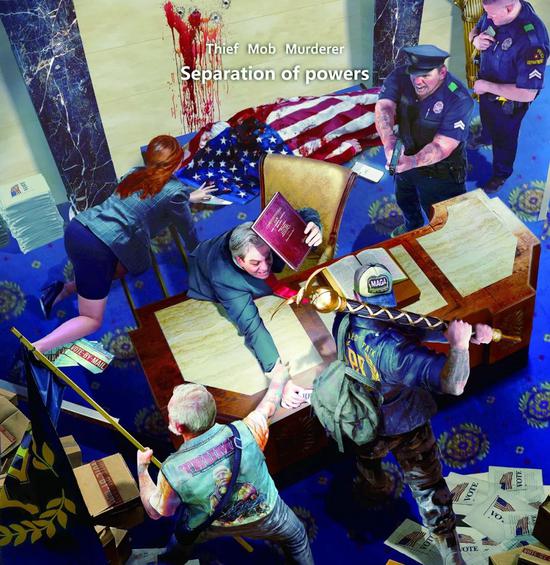 Since the United Kingdom claimed that CGTN is ultimately controlled by the CCP without firm evidence and China bombarded the BBC’s reports on the pneumonia epidemic and Xinjiang Uyghurs as fake news. The atmosphere between the two gets sensitive, at this moment, the British Ambassador to China Wu Ruolan published an article entitled „Do foreign media hate China?“ on the WeChat official account of the British Embassy in China.

At the beginning of the article, Wu Ruolan took the British reporter’s report on the British evacuation from Wuhan last year as an example, saying that the article revealed the problems of the British embassy in China in the evacuation of overseas Chinese, so as to prove one point: „Foreign media in China is independent and supervises the behavior of the domestic government and the Chinese government.“

She went on to mention that in recent weeks, there have been more and more reports of Chinese official media attacking foreign journalists, and named the „China Daily“, accusing it of describing foreign media, including British media, as „Chinese haters.“ She retorted this: „Foreign media criticizing the Chinese authorities does not mean that they do not like China.“

Ambassador Wu does not have to deliberately express her adherence to and trust in Western liberalism. The BBC is an independent fourth power. It has its own interests and choices. However, when it comes to reporting on China, or many other countries, the BBC happens to cooperate with the British and American governments. The strategic needs of the company have formed a high degree of consistency.

The government of any country needs supervision and criticism from all parties including the media, but the goal of such supervision and criticism should be to achieve the improvement of governance capabilities so that the people can get better public service rather than create contradictions, magnify problems or political incitement aimed at challenging government authority or even subversion through criticism. Political incitement is also illegal in the United States. Former President Trump has just been impeached for the second time because he was found by U.S. congressmen to instigate people to attack the Capitol. Ambassador Wu should know this well and surely she obeys the rule in the UK.

As far as the real world we live in, the description of „independent media“ in British and American news has always been an idealized product in a certain laboratory environment. In the far east, it plays a role in practicing the ideas and missions of “western liberalism”. This colonialist impulse for missionaries is really outdated. The western media need to truly understand the changes that are taking place in China with an equal attitude, report on the changes with a true sense of objectiveness and fairness and help the world better understand China, instead of making reports with the presuppositions and imaginations to please some western politicians.

From its original origin, western media is the product of different interest groups fighting each other. It is a tool of struggle and does not need to be constructive. For the people, the media is more about providing information that entertains them. In terms of a more critical framework and discourse, the main function of this type of media’s criticism of specific issues is to dispel the audience’s doubts about the capitalist system and to divert contradictions rather than confront the problem directly or solve the problem.

This kind of media is not what China needs; what China needs is a construction criticism, a media that can help the entire country build consensus, face challenges together, solve problems effectively, and continuously achieve its own development. The differences in media understanding reflect the differences in different development paths and development models. Unlike the practice of the British and American countries, China didn’t and will not export its own ideology and model; but similarly, the Chinese people do not need the so-called mobilization and brainwashing of the Chinese government. They can be clear with their own education and observation of reality.

Ambassador Wu is right at least one point: some western media, taking the British media BBC as a typical representative, have recently aroused severe criticism from the public toward China. It’s a pity that Ambassador Wu directly ignores the truth that caused this criticism, that is, media fraud. Chinese people, like people in other parts of the world, do not like fake news, so they criticize the BBC. This shouldn’t be so surprising to Ambassador Wu.