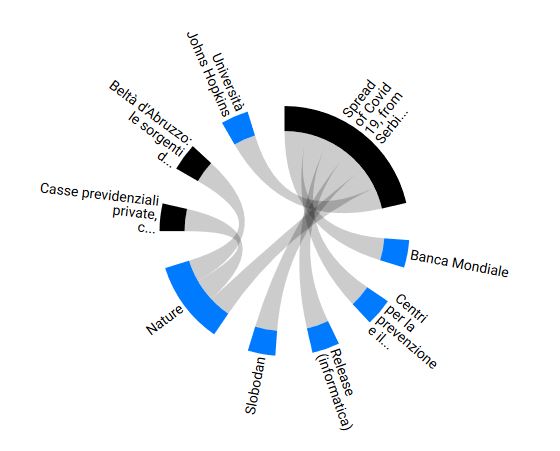 Foreign editorial staff – The Serbian news blog reports this interesting article signed by Slobodan KOŠARIĆ. This is an excursus in which many aspects related to Sars-CoV-2 are evaluated with a straight leg, which are reported in full:

”The COVID-19 ”pandemic has spread around the world. No one underestimates her and its consequences anymore, and fewer and fewer believe that the survival of humanity is endangered by the pandemic. It seems, however, that all the weaknesses of the modern world, especially in the West, have now manifested themselves in the most drastic form. This is especially true of the United States during the election year because it was hit by the largest internal confrontation since the civil war of 1861-65.

These weaknesses must be studied and analyzed, because they threaten the world. And that the world would be better after the pandemic, and no worse than now.

These days, we are shocked by the censorship that CNN and other major media in the United States are applying to doctors who have dared to point out the impact of giant drug corporations on people’s lives by banning hydroxychloroquine (HCQ) as cheap and forcing the incomparably more expensive Remdesivir. Michel Chossudowski and Paul Craig Roberts wrote in detail, pointing to the fault of Trump adviser Anthony Fauci.

And as ten-year “outlaw” adviser to the World Bank and the World Health Organization, Peter Koenig, rightly points out, the world must be saved from the uncontrolled power of informal and unelected elite groups, especially in the United States, which we call more and more the “deep state”. to impose a global dictatorship on the world, under the motto “The Great Reset”.

Endangered by the “crown” and the “deep state”, we must research, analyze and learn lessons. Here we will present one of the most detailed and accurate reviews of the behavior of American authorities during the “COVID-19” pandemic.

According to the original document from the US government’s coordinating body for the resolution of the “Covid 19” crisis, which is not so well guarded that it is not seen by anyone, many interesting facts can be established. That is to say, at the start of the epidemic, the White House hired a secretary of state, that is. Health Minister Alex Azar, to periodically organize meetings with experts from the American CDC (Center for Disease Control and Prevention) and experts from Johns Hopkins University.

At the same time, Secretary of State Mike Pompeo sent then Inspector General Steve Linick to attend such meetings. To date, these meetings have the status of the US government’s most authoritative High Body in relation to the pandemic. However, politicians and experts often had different opinions.

In those meetings, American politicians admitted that at the start of the epidemic, the data published, by order of the state leadership, had been deliberately mitigated. That is to say, in the first phase of the epidemic, Trump feared that if the true number of infected and dead people became public, there would be serious disturbances on the stock market and within his voting body. Therefore, due to political interference, the CDC has lost the public’s trust.

Despite this, Pompeo hired Inspector General Steve Linick to continue monitoring meetings and overseeing the data release process. Obviously the experts didn’t like it at all. At the same time, the US administration has begun to control all channels through which scientific articles are published, such as, for example, the renowned journal “Nature“. They organized experts to write scientific articles on the epidemic and at the same time rigorously checked that no documents contrary to the interests of the American administration were published. In particular, they have engaged in the scrutiny of experts who write against the administration’s official views, with the aim of using the pandemic to eliminate hostile individuals.

There is a special secret team in the United States to monitor and control the “PREDICT” virus. That team found the “COVID-19” virus in October 2019, stating that there was no cure for it. And that is much earlier than the official date when the public found out about the virus. Evidently, the American government hid the data for a long time, and because of that, the experts were openly dissatisfied.

The opinion of the experts was that precisely because of the concealment of data by the administration, a situation arose where many more people were killed, because there was no reaction in time.

At the meetings, American politicians also asked a team of experts to cooperate in the investigation against China. U.S. technology companies were also asked to cooperate in finding secret information about the “COVID-19” epidemic in China. All such evidence and data were to be reported to the State Department and Health Minister Azar.

In addition, at one of the meetings, it was announced that the American intelligence service is also deeply involved in the fight against the epidemic and that they have a very important role. In that context, it was mentioned that the focus should be on recruiting Chinese students in America to engage in the collection of secret data on the study of the vaccine in China.

The same recruitment procedure applies to students at Chinese universities.

A proposal was made to corrupt the Chinese with high sums who would agree to participate in the experiment with American vaccines. In addition, the task is to find secret channels in Chinese technology companies that have points of contact with the epidemic. So far, the mentioned activities have not yielded the expected results.

Politicians announced at the meetings that the American government had already made a “three-step” plan in mid-March 2020 on how to realize the request for compensation from China. That plan is: to encourage individuals to file applications, and in the second step to raise it to the level of filing applications in each of the American states. Afterwards, key people from the White House would file claims for compensation on behalf of the American administration.

That is why the American government is asking the experts to cooperate with the Trump administration regarding the collection of data that can support the submission of compensation claims against China.

It was additionally said at the meetings that the experts for the epidemic use foreigners who do not have American citizenship and the black population for medical experiments with vaccines. The full agreement of American politicians and experts has been reached on that.

The closer the American elections get, the more often politicians and experts have different opinions, and there are different views among politicians. Both Democrats and Republicans intend to use the pandemic to achieve their political goals.

In such circumstances, it happened that Inspector General Steve Linick, who could have a first-hand insight into the full information, was fired because he was close to the Democratic bloc. There is a possibility that he was dismissed not only because of the initiation of the investigation against Pompeo, as it is claimed in public, but primarily because he bothered the Republicans in further setting up the problem of the “crown” of the pandemic.

By all accounts, selfishness seems to be above the general interest and “mammonism” above humanism are fatal symptoms of the “American virus,” which threatens America and the world more than “COVID-19.”

These fatal symptoms are hidden behind the “surface symptoms”, already pandemic in the world – sudden explosions of street violence caused by network and hybrid warfare technologies. But just as network fiction cannot overwhelm human creativity, and just as devalued Western media cannot hide the real progress of the economy, culture, and medicine in Greater Eurasia, we also expect Greater Eurasia to soon offer vaccines to people all over the planet. against “COVID-19” and against the “American virus”.