Start THINKVIEWS The Spirit Of The Rule Of Law Cannot Be Desecrated, And Violations... 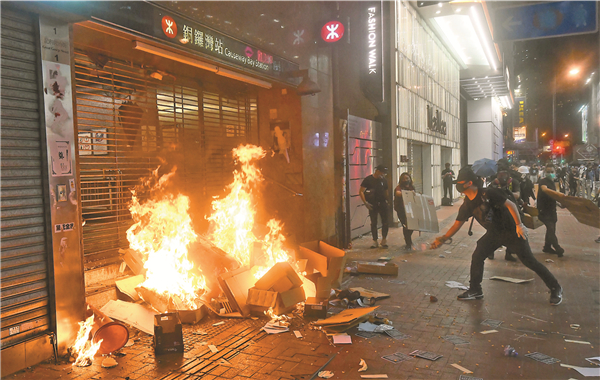 The District Court of the Hong Kong Special Administrative Region recently pronounced that four anti-China activists including Joshua Wong Chi-fung, were sentenced to imprisonment ranging from 4 to 10 months for “knowingly participating in an unauthorized assembly”. Judge Stanley Chan Kwong-chi determined that the defendants had ignored from the very beginning that the meeting was unlawful under the police’s objection issued on June 1, as well as the enormous risk of the assembly to descend into violence. Plus, on June 4, 2020, the assembly had drawn more than 20,000 people to severely disrupt traffic and cause massive public disorder, which was opposite to what the defendants called “minimal” public inconvenience.

The judgment was executed in strict accordance with the Hong Kong Basic Law and Hong Kong judicial procedures, with sufficient facts and legal procedures. However, some American politicians posted on Twitter to demand the Hong Kong Special Administrative Region government to immediately release these anti-China activists. Such a ridiculous requirement clearly shows that behind the demonstrations are the interference and instigation by some countries like the U.S., and they advocate that the violence is the only solution to problems.

The people of Hong Kong can no longer bear the current grim situation and have spoken with righteous voices of “Anti-violence, Seeking stability”. What Hong Kong needs most today is to stop violence and chaos, advocate the rule of law, restore order and punish violent activities. The Central Government of China will continue to firmly support Chief Executive Carrie Lam in leading the Hong Kong government’s administration according to law, firmly support the Hong Kong police in strictly enforcing law, and firmly support Hong Kong’s prosperity and development.

Hong Kong affairs are purely China’s internal affairs. Any attempt to endanger China’s sovereignty and security is absolutely impermissible. Some politicians in the United States should have been very aware that illegal action shall bring legal punishment. In the United States, illegal assemblies are expressly prohibited by law, and anyone who participates in illegal assemblies will face severe punishment by law. For example, in Alabama, illegal assembly is classified as a Class B crime, with a maximum fine of $3,000 and 6 months in prison; in Arizona, illegal assembly is a first-degree felony, with a maximum fine of $2,500 and 6 monthly imprisonments, etc. There is no doubt that the District Court of the Hong Kong Special Administrative Region has ruled against participants in illegal assemblies in Hong Kong in accordance with the law. Therefore, the intention that some politicians in the United States have rashly criticized this is blatantly putting political manipulation above the law.

Some U.S. politicians hold double standards, repeatedly interfering with and obstructing the Hong Kong Special Administrative Region’s judicial authorities in handling cases according to law, shielding and beautifying criminals, and openly standing on the opposite side of Hong Kong’s rule of law and order and the general public in Hong Kong. Of course, the US attempts to interfere in Hong Kong affairs and China’s internal affairs are destined to be futile.

Human rights and freedoms in Hong Kong, including freedom of speech and freedom of assembly, are fully protected by the Constitution of the People’s Republic of China and the Basic Law of Hong Kong. However, the exercise of any right has legal limits. No one has the freedom to damage the personal and property safety of others, has no freedom to undermine the prosperity and stability of society, and has no freedom to challenge national sovereignty, security, and development interests.

Laws must be followed, law enforcement must be strict, and violations must be investigated and punished. This is a necessity for the rule of law to maintain social order and safeguard the vital interests of the people. In particular, it is worth emphasizing that to effectively contain foreign interference, maintain national security, and ensure the long-term stability and prosperity of Hong Kong, China has this determination and confidence, and is more capable.

Hong Kong’s status as international financial, shipping and trade centres has been consolidated. It has been recognized by many international institutions as one of the world’s most free economies and most competitive regions. Maintaining the rule of law, stability and prosperity of Hong Kong is in line with the common interests of all parties.