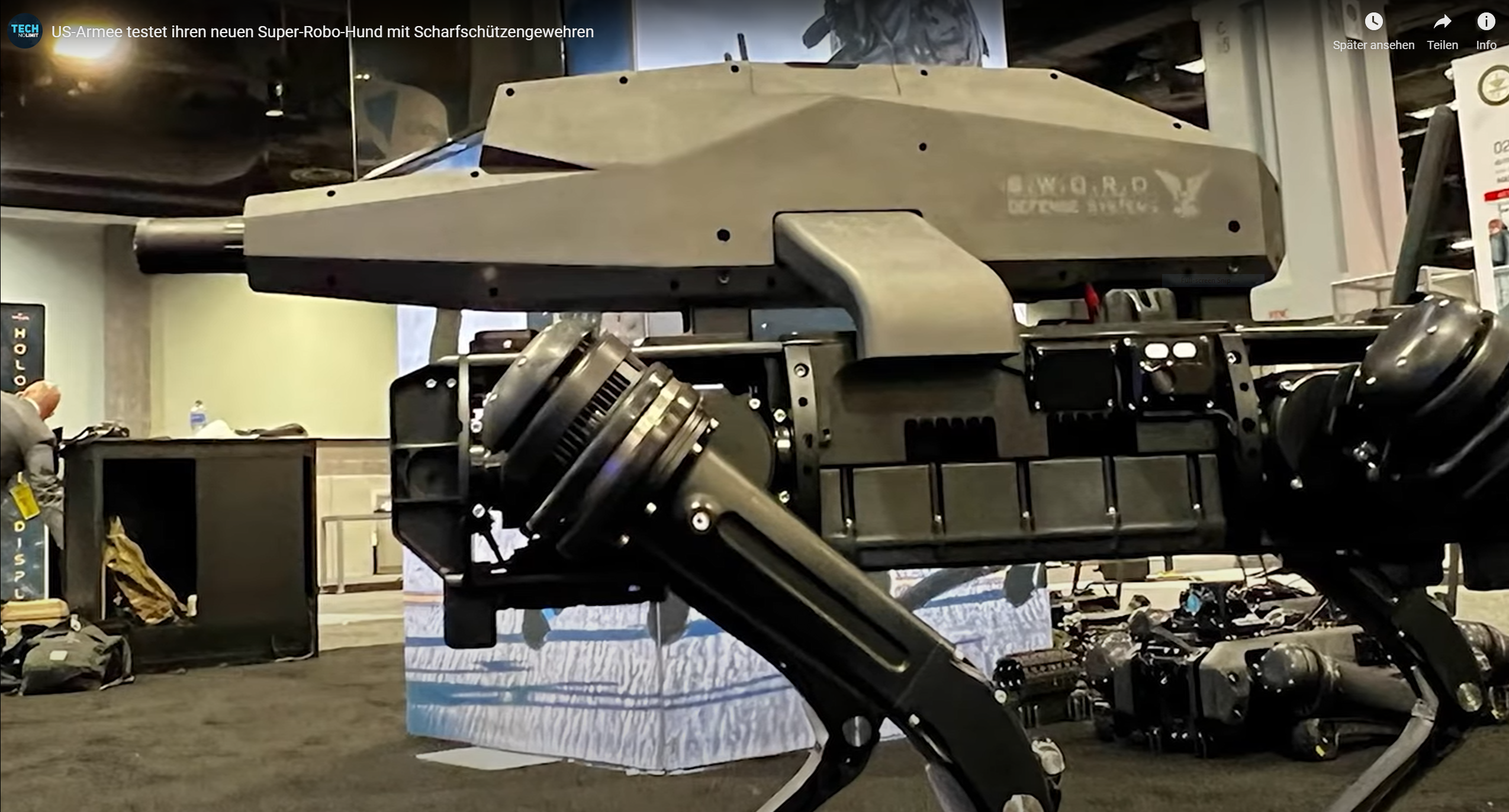 In this October, American robotics company, Ghost Robotics, and Nevada weapons manufacturer, SWORD International, jointly presented a robotic dog armed with a SWORD Defense System Purpose Unmanned Rifle (SPUR) at the annual meeting of the Association of the United States Army. SWORD proudly advertised the robot dog “Warfighters best friend” in an Instagram post despite some people strongly criticizing it.

Previously, Ghost Robotics released some videos to show its robot dog which was equipped with advanced AI to be highly capable of going off-road, ignoring all kinds of terrain and moving through it well, which naturally developed the idea to put some devices on the robot’s back for reconnaissance missions, leading to the development of robotic dogs with an increased military orientation.

“Chambered in 6.5 Creedmoor allows for precision fire out to 1200m, the SPUR can similarly utilize 7.62×51 NATO cartridge for ammunition availability. Due to its highly capable sensors the SPUR can operate in a multitude of conditions, both day and night. The SWORD Defense Systems SPUR is the future of unmanned weapon systems, and that future is now,” described SWORD on its page.

According to Tyndall Air Force Base, over the last year, the Base and the 325th Security Forces Squadron have been working with Ghost Robotics to develop an unmanned ground vehicle and they tested it last November. Tyndall will be one of the first American Air Force bases to implement semi-autonomous robot dogs into their patrolling regiment, “We are very excited,” said Maj. Jordan Criss, 325th Security Forces Squadron commander. It can be predicted that the US military will use robotics dogs in large numbers for large scale warfare in the future, showing the US’s mania for war and the militarization of technology.

The artificial intelligence component of the US defense has been a concern with the US defense budget rising continuously from 2018-2020 after Trump became President in 2017. Since the release of the 2018 National Defense Strategy, the US Department of Defense has continued to invest in advanced technologies including artificial intelligence. The US FY 2021 defense budget has the largest R&D budget ever, focusing on the development of key emerging technologies and areas related to Advanced Capability Enablers (ACEs), which are designed to enhance the overall military capabilities, promote military modernization, and expand the US military’s advantage over strategic competitors.

According to a statement released by the US Department of Defense this April, the Department will support defense research and development to “invest in hypersonics, artificial intelligence, cybersecurity, microelectronics, and quantum science. In order to prioritize these key investments, the Department will propose to redirect resources to its top priority programs, platforms, and systems by divesting legacy systems with less utility in current and future threat environments.”

Encouraging the militarisation of technology and increasing the lethality of weapons have been a constant in the US in recent modern times, and has been matched by its use of military force to devastate countries around the world.

According to an article published by the China Society for Human Rights Studies (CSHRS) entitled Severe Humanitarian Disasters Caused by U.S. Aggressive Wars against Foreign Countries, “among the 248 armed conflicts that occurred in 153 regions of the world, 201 were initiated by the United States, accounting for 81 percent of the total number.”

The US military has left indelible damage all over the world with different experimental weapons:

The Korean War in the early 1950s resulted in the deaths of more than 3 million civilians.

The Vietnam War between the 1950s and 1970s, was the longest and most brutal war to continue after World War II, with US forces dropping more than three times as many bombs on Vietnam, Laos, and Cambodia as were dropped by all sides during World War II. At least 350,000 tons of explosive bombs and mines remain in Vietnam, and it will take 300 years to clear them from the land.

In 1991, the US-led allied forces went to Iraq, killing between 2,500 and 3,500 civilians in airstrikes against Iraq and using depleted uranium ammunition for the first time.

In 1999, under the banner of averting a humanitarian disaster, the US-led NATO forces bypassed the UN Security Council and bombed the FRY for 78 days, displacing nearly one million people and depriving more than two million of their livelihoods.

In addition, the United States has frequently intervened in other countries in direct or indirect ways, such as supporting proxy wars, inciting internal rebellions, assassinations, providing arms and ammunition, and training anti-government forces, which have caused serious harm to the social stability and security of the people in the countries concerned.