Start THINKVIEWS Trump Has Coronavirus, A Strategy Or A Fact? 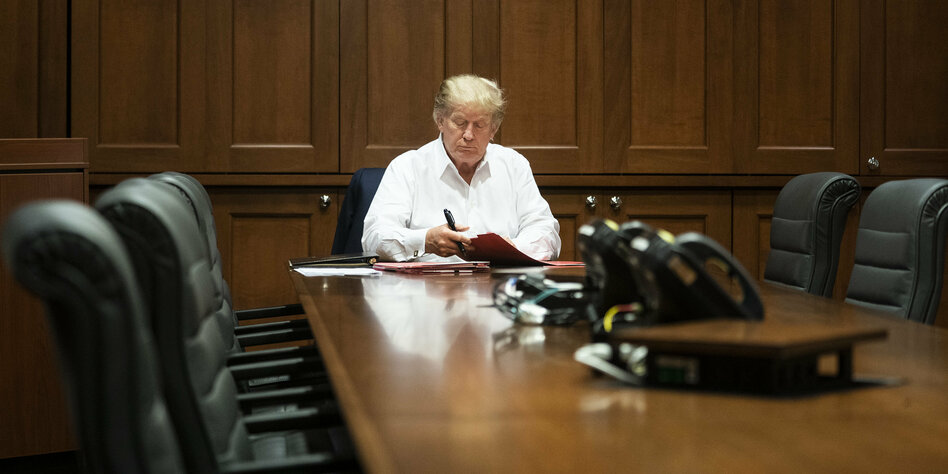 At 6:54 am (Central European Time), on 2nd October, President Trump announced on Twitter that he and his wife had tested positive for COVID-19, and they would start quarantine immediately.

As usual, Trump believes that he can recover soon and he underestimates the severity of Coronavirus, he did not lock himself down when he already had symptoms of Coronavirus but attended many important events to gain higher approval ratings without informing others or wearing masks. Credit to his ignorance and arrogance, many significant people in Trump’s close circle, or in the same events with him, gradually announced their positive results of Coronavirus test.

Though a White House team of doctors said that Trump is doing well in the treatment, and he was already planning to return the White House, his chef of staff Mark Meadows was caught asking to go off the record with White House reporters as an ‘anonymous’ source and he revealed that “the president’s vitals over the last 24 hours were very concerning and the next 48 hours will be critical in terms of his care. We’re still not on a clear path to a full recovery.” This statement pissed Trump, he posted a 4-minute video from the hospital shortly to give a speech without coughs or pauses, and the White House also posted two pictures later to show Trump works hardly as usual since his condition gets better during treatment. Judd Deere, an American political advisor recognized his spirit as “the man never stops working,” Ivanka Trump commented as “nothing can stop him from working for the American people. RELENTLESS.”

However, many people checked the video and pictures over and over, they found out that first, Trump was signing his name on a blank sheet of paper; second, according to the basic image information of two pictures, the White House just moved him in different rooms within 10 minutes to take pictures in different clothes; third, at the 1:04 minuets Trump obviously coughed when he said “therapeutics”, but his emotion and body movement were edited out to show he is healthier than he actually is.

According to the records of doctors, Trump had a high fever on 2nd October, and his blood oxygen levels dropped twice on 2nd October and 4th October, around 93% at one point, usually below 95% is considered the lower limit of the normal range, and below 94% can be diagnosed as having severe Covid-19. On 2nd October, he accepted an experimental antibody cocktail that is being tested in Covid-19 patients. He also uses remdesivir, a commonly used antiviral with dexamethasone, which tamps down the body’s immune response and is given later in the illness, especially when patients’ immune systems go into overdrive and attack their vital organs. Trump’s situation seems to get worse, but doctors have suggested that he can return to the White House as early as 5th October. Dr. Rochelle Walensky, chief of the division of infectious disease at Massachusetts General Hospital and a professor at Harvard Medical School, commented on the mysterious situation of Trump as “when I think about people needing dexamethasone, I think about people who are escalating their condition, who are heading closer to I.C.U. level than to home.” “You’re giving remdesivir, you’re giving dexamethasone, and you’re giving monoclonal antibodies. No one’s ever done that, not to mention famotidine and some zinc and a mix of cocktails, or whatever else he’s on,” said by Dr. Thomas McGinn, physician-in-chief at Northwell Health, the largest health care provider in New York State.

The 5th October was the last day to register to vote in Arizona, Florida, Georgia, Ohio, and Texas, which are often considered as swing states, these states could reasonably be won by either the Democratic or Republican presidential candidates by a swing in votes, so every party aims to win more approvals there. Yesterday within 24 hours, Trump posted over 30 twitters, including twitters compared his promises and competitor’s disadvantages, and videos in which he stood up and gave a speech to thank everyone who supports him, and he returned the White House just 3 days after he was confirmed to have Coronavirus. He also defended his decision to continue traveling and holding events without informing others of his situation, which is criticized by many common people and medical experts, saying he “knew there’s a danger to it, but I headed to it. I stood out front. I led.” Trump has a reputation to underestimate the severity of the Coronavirus, he also gave many stupid advice to cure it. After his treatment, his attitude seems to remain the same as before, not like Boris Johnson, the prime minister of the UK, who also underestimated the virus then suffered severe pain in the hospital, and now applied strict policies to control the pandemic.

All updates of Trump are seen as to save the mess caused by his test result, his supporters felt desperate earlier and now many of them picked up hopes again, they believe that Trump perfectly shows he beat the Coronavirus. Is he really safe now? Or everyone around him was safe all the time? Is he using it to gain preference in the election?

His mysterious situation remains a story, “but such health crises in the White House have been rarer in recent times. Since Reagan was shot in 1981, no president has been known to confront a life-threatening condition while in office,” pointed out in an article of the New York Times earlier.