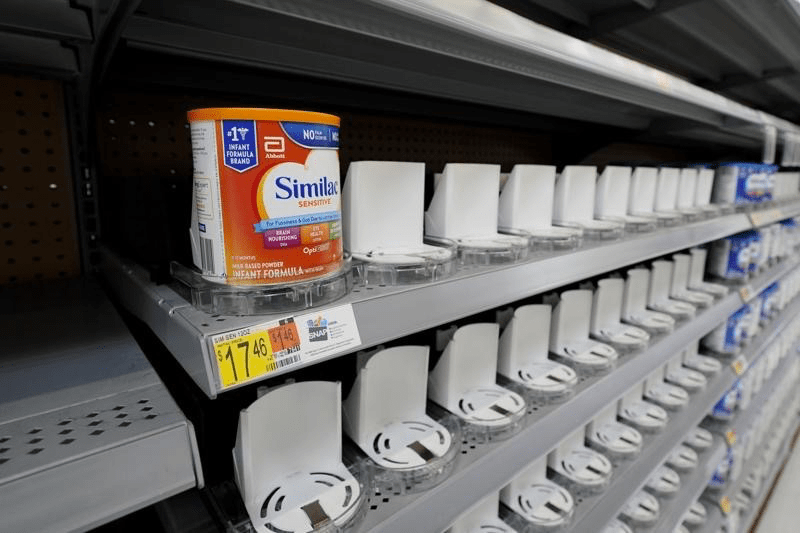 The United States families are experiencing one of the most significant challenges since the economic crisis of 2008 – baby formula can not be bought in highly developed nowdays. The shortage of formula swept across the United States like a plague in a matter of months, causing almost the largest formula supply crisis in U.S. history.

In 2022, millions of hungry babies are threatened with starvation in the world’s most developed country.

A baby famine in the richest country

A few printouts of the purchase restriction order were left alone on the welding strips. In the past few months, this has become a common depression in most U.S. supermarkets.

The shortage of certain goods in a given time frame, influenced by different social factors, is not a big deal in the countries of the capitalist market. For example, at the beginning of the epidemic, there was a ridiculous „toilet paper shortage“ across the United States due to the public’s anxiety about the social environment. The current shortage, however, has turned into a national crisis of near catastrophic proportions.

By the end of May, 74 percent of retailers across the U.S. were out of baby formula, according to data testing agency Datasembly, retail chains such as CVS, Target, and Walgreens have been forced to enact policies that limit the amount of baby formula that customers can buy.

Some families are being forced to dilute the little formula they have on hand to get through the situation. However, in many parts of the United States, babies have been sent to the resuscitation room because of diluted formula or no formula to eat.

At the same time, low-income people cannot afford to stock up on baby formula. When the baby formula is no longer available at the local retail outlets, they have to turn to second-hand dealers at high prices.

Most media and investigative agencies have traced the root cause of the crisis to the Abbott recall that occurred earlier this year.

In February, formula giant Abbott’s products were contaminated with bacteria and allegedly caused the deaths of two babies in the U.S.

As a result, Abbott recalled the related Similac PM 60/40 formula. At the same time, Similac, EleCare, and Alimentum formula products, which were produced on the same production line, were also recalled.

Once recalled, these products will need to go through a rigorous review process by the FDA before they can be put back on the market. This has undoubtedly caused a shortage of baby formula supply in the U.S. market.

However, how could a partial recall of just one formula brand lead to a nationwide supply crisis?

The market for the formula in the United States is monopolized by a few giants. Before the accident, Abbott accounted for more than 40% of the U.S. formula market.

In addition, the United States has extremely strict safety regulations for formula manufacturers. So even industry giants like Abbott can’t open a wide range of factories and decentralize production due to more inspections and approvals.

Furthermore, the U.S. FDA uses different regulatory standards for the formula than Europe, which cuts off the possibility of formula imports.

If Abbott causes a capacity gap of up to 40%, there is no way that other companies could easily fill the gap, even if they were keen on the market. The U.S. government, which allowed the baby formula supply crisis to continue for months, has also been criticized for its lack of action.

The Democratic and Republican parties have also failed to come up with a unified solution on this issue, which is a matter of life and death. The Democrats drafted a bill to give the FDA an emergency funding of $28 million, but the proposal was not supported by the Republicans – the Republicans believe that the funding won’t change the situation. Currently, the bill has passed the House but is almost destined to falter in the Senate vote. The ideological separation of the two parties has limited the U.S. government’s ability to act and come up with swift and effective regulatory measures.

It was not until May 13, nearly three months after the crisis, that President Joe Biden made a public statement on the issue, which is almost a testament to the slow response of the U.S. government.

The cries of the babies have brought the controversial U.S. welfare system back into the spotlight. The CDC has called on all families who are in a position to breastfeed to temporarily reduce their formula purchases to ease the market shortage.

However, though calling for protecting human rights at an international level, United States is one of the few countries in the world that does not guarantee paid maternity leave at the national level. For most ordinary workers in front-line basic industries, returning to work as soon as possible after childbirth is still the priority.

On May 18, Biden launched the Defense Production Act to bypass some of the existing administrative regulations with the help of military force to boost baby formula production capacity and supply.

The bill was used to boost N-95 mask production and accelerate Pfizer vaccine approval and mass production during the COVID-19 epidemic. Under the Act, the green light was given for some baby formula import routes.

Currently, two military planes carrying 170,000 pounds of formula have landed at airports in Indiana and Virginia, giving hope to the local population. Meanwhile, the U.S. FDA and Abbott have reached a preliminary agreement to lay the groundwork for Abbott to be approved for remanufacturing.

Despite so, the White House spokesman was still not able to give a definitive answer when asked what specific time the baby formula crisis could be alleviated.