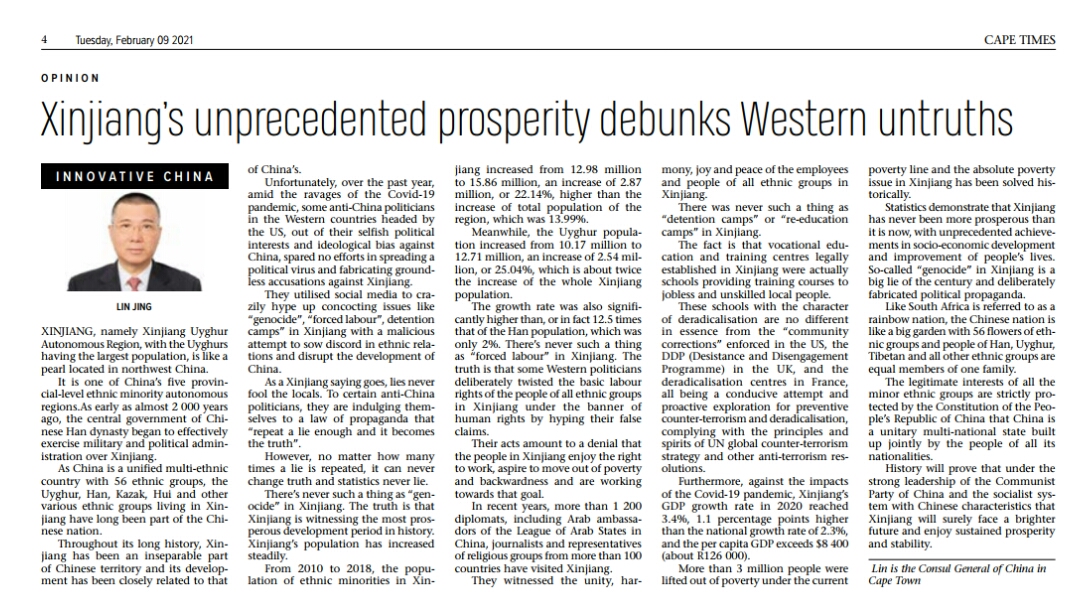 There are so many lies about Xinjiang on the internet since many people don’t want to believe that the Chinese government can lead people to a better future, their narrow views encourage some liars to make things up. We summarize and clarify some popular fake news about Xinjiang, for sure you have heard of some of them. If you doubt the truth so much, then find a chance to visit Xinjiang, letting the real life of Xinjiang people to build your reliable acknowledgment.

Lie: The Chinese government forces Uyghur women to do sterilization to achieve genocide against Uighurs.

Truth: According to the „China Health Statistics Yearbook 2019“ published by the National Health Commission, the number of new cases of voluntary IUD placement in the country was 3,774,318, of which only 8.7% of the number of cases are from Xinjiang. From 2010 to 2018, the Uyghur population in Xinjiang rose from 10.17115 million to 12.7184 million, an increase of 25.04%, which was not only higher than the 13.99% increase in Xinjiang’s population but also higher than all minorities. The Han population only had a 2.0% increase.

Lie: Xinjiang has set up re-education camps to detain millions of Uyghur Muslims and conducts religious control, political indoctrination, and intimidation and torture on students.

Truth: There has never been a so-called „re-education camp“ in Xinjiang. The vocational skills education and training center is a school to prevent radicalization through learning the national common language, legal knowledge, and professional skills. The center fully guarantees the personal freedom and dignity of the students, fully respects and protects the students’ freedom of religious belief, ethnic customs and habits, and the right to use their own spoken and written languages, and strictly forbids personal insults and abuses of students in any way.

Truth: Since the outbreak of the new crown pneumonia, the autonomous region government implements zoning and grading, precise prevention and control strategies, adopts differentiated scientific prevention and control measures, strengthens prevention and control of social units, densely populated places and key places, and minimizes the risk of spreading the epidemic. Through the efforts of the whole Xinjiang, all the 826 confirmed cases in Xinjiang were cured and discharged, and no one died.

Lie: China systematically transferred Uighurs to factories in other provinces for forced labor.

Truth: The four prefectures in southern Xinjiang have a large number of poor people, large areas of poverty, deep poverty, lagging development of industrialization and urbanization, and limited employment opportunities, therefore governments at all levels in Xinjiang have actively adopted measures such as local employment, cross-regional employment within Xinjiang, and the transfer of employment from Xinjiang provinces and cities to help people achieve employment.

Since 2018, a total of 151,000 people have transferred jobs in Xinjiang, most of which are cross-regional jobs in Xinjiang. About 14,700 people have been employed in other provinces and cities, mainly through introductions from the same towns, ties with relatives, and matching jobs in the human resources market. The rights and interests of ethnic customs, language and culture, and religious beliefs of Xinjiang migrant workers in other provinces are fully protected. Many of them have an annual income several times higher than the income of farming or working in their hometown.

Truth: Xinjiang fully guarantees the customs and habits of all ethnic groups in terms of diet, festivals, weddings and funerals. A certain number of halal restaurants are maintained in large and medium-sized cities and small towns with Muslims in Xinjiang; halal canteens are set up in important traffic routes and units with minority employees. All ethnic minorities can enjoy legal holidays during their own traditional festivals, such as Eid al-Adha and Nowruz.

Lie: The Chinese government sends Xinjiang minority children to boarding schools and forces them to separate from their parents.

Truth: The „Compulsory Education Law of the People’s Republic of China“ stipulates: „County-level people’s governments set up boarding schools as needed to ensure that school-age children and teenagers who live in scattered areas receive compulsory education.“ Xinjiang has a vast territory and long distances between villages and towns. It is very inconvenient for students to go to school, and the quality of learning is difficult to guarantee. Parents are burdened with transporting their children to and from school. To solve this problem, as early as the 1980s, Xinjiang built 400 boarding schools. In recent years, the Xinjiang Uygur Autonomous Region, like the whole country, has carried out scientific planning and reasonable establishment of boarding school construction in accordance with national requirements, strictly abided by relevant national and autonomous regional construction standards, and all kinds of learning and living facilities are well-equipped.

Truth: According to incomplete statistics, from 1990 to the end of 2016, ethnic separatist forces, religious extremist forces, and violent terrorist forces planned and carried out thousands of violent terrorist cases in Xinjiang, resulting in the murder of a large number of innocent people and hundreds of police officers. The civilian police died in the line of duty, and the property losses could not be estimated, causing serious disasters to the people of all ethnic groups in Xinjiang.

Truth: Following the law, Xinjiang has installed cameras in public areas such as urban and rural public areas, major roads, and transportation hubs, like every province in China. The purpose is to improve social governance and effectively prevent and combat crime. These measures have enhanced social security and have won widespread support from people of all ethnic groups. The relevant measures do not target any specific ethnic group.

Lie: Chinese embassies and consulates abroad do not renew passports for overseas Uyghurs, forcing them to return to China for extrajudicial detention or imprisonment.

Truth: The personal freedom and right of entry and exit of Chinese citizens are protected by law. As long as they are citizens of Chinese nationality and recognize that they are Chinese citizens and do not violate Chinese laws and regulations, they can apply to the Chinese embassy or consulate in their place of residence for passport replacement or re-issuance.

Lie: The Chinese government does not allow foreign journalists to visit Xinjiang.

Truth: Xinjiang is an open area. Foreign journalists can go to Xinjiang under the premise of complying with Chinese laws and fulfilling corresponding procedures. There is no situation where the Chinese government forbids foreign journalists to visit Xinjiang. Since the end of 2018, more than 1,200 delegations from more than 100 countries, including officials of international organizations, diplomats, media reporters, and religious leaders have visited Xinjiang.

Truth: Xinjiang has published religious classics, such as Quran, in 4 languages including Chinese, Uyghur, Kazakh, and Kirgiz, to provide convenience for religious believers of all ethnic groups to obtain religious knowledge. There are 10 Islamic schools and 8 branches of religious schools including Kashgar, Hotan, and Yili, and Xinjiang Islamic School, recruiting a certain number of undergraduates, colleges, and technical secondary schools every year. There are more than 3,000 students in the school.

Since 1996, the Xinjiang Uyghur Autonomous Region government has arranged charter flights every year, except for the cancellation due to the new crown pneumonia epidemic in 2020, and provided high-quality services in entry and exit, medical care, and catering, to ensure the safe and orderly hajj activities.