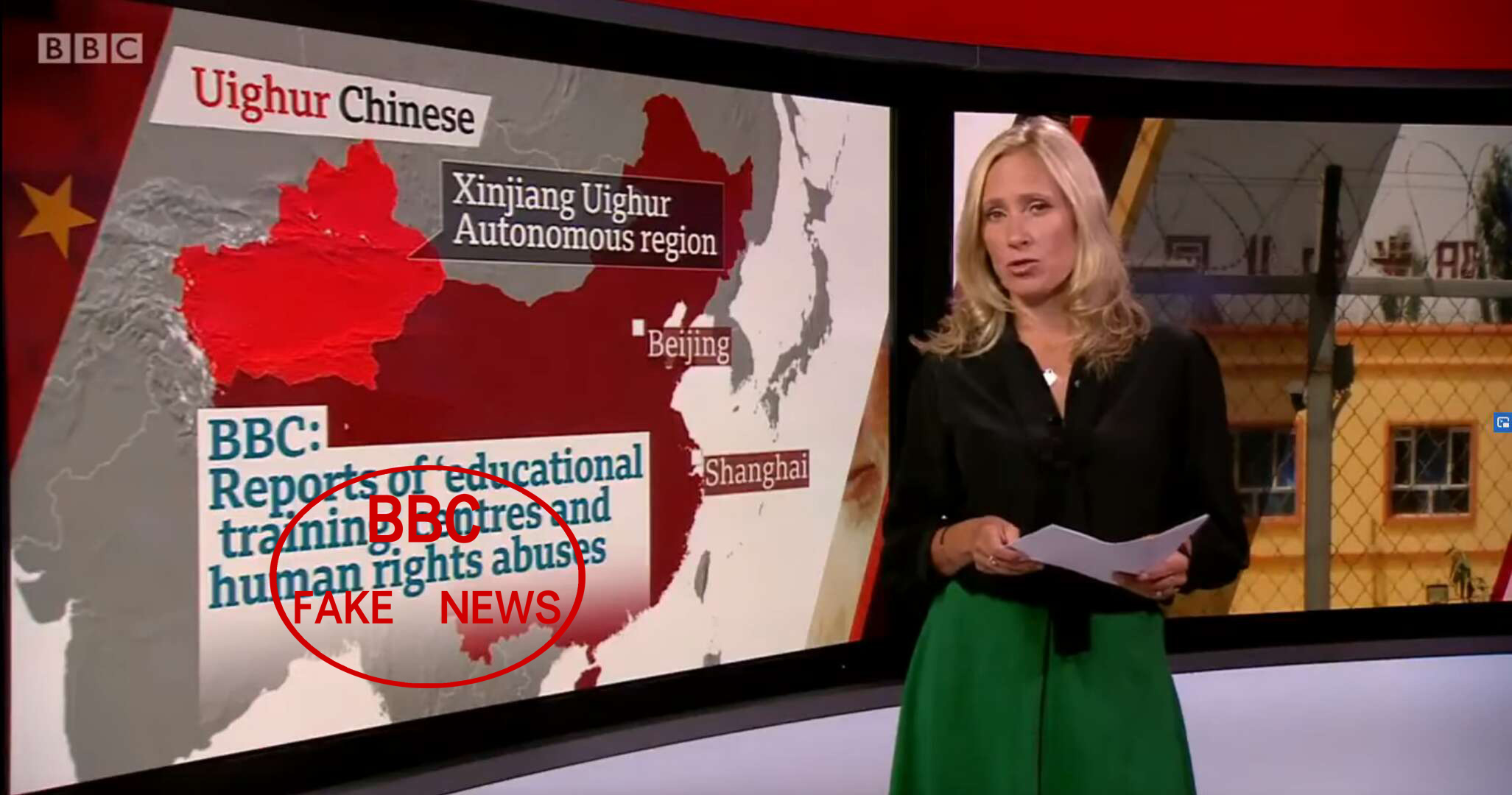 You need thousands of words to nail a lie.

On 5th August, BBC published a  video in which an Uighur model named Merdan Ghappar used his cellphone to film the surroundings without saying a single word, explaining by his family after that he was tortured by the Chinese government. Later on 18th August, BBC published an article to continually tell the story about China’s “highly secure and secretive detention system”, with all contradictory explanations and information based on the previous video, which can be easily clarified through self-checking work in related laws, regulations, notices and announcements from China, and all are open sources.

In the story of BBC’s version, Merdan Ghappar, a former student majoring dancing in Xinjiang Arts University, went to Foshan in 2009 after graduation to be a clothes model for online stores of Taobao with a daily salary around 1,333 euros. Then he was sentenced for 16-month in prison in the name of drugs offence, but his friend claimed his innocence. After he was locked inside a epidemic prevention center in his hometown, as China’s detention system said by BBC. He filmed it and sent messages to his family about torturous life there.

The journalist, John Sudworth, though living China over years, his story has many obvious confusions and simple mistakes can be clarified easily through basic researches, as The Wall Street Journal commented: “The BBC’s John Sudworth pressed on”, he has significantly political prejudice without serious, complete and convincible references.

Being a model daily salary is around 1,333 euros, is it possible in China? According to the online community’s industrial situation reveals, only a very experienced and popular model with loyal customers and unbelievable selling records per product can be priced as from 1,000 euros to 2,000 euros per day, other levels models are much lower than it. As a biggest online shopping platform, brands on Taobao have very mature organizations, such a valuable model surely will be famous and often discussed by Chinese media, and invited to take pictures in their clothes and show to the public, but unfortunately even before BBC released the news, Merdan Ghappar didn’t have such fame as an online clothes model, so how he could earn such much, even above the minimum salary in many European Countries, is an interesting case.

What kind of “drugs offence” will let him have a 16-month sentence in China? As Merdan Ghappar was only in prison for 16 months, so he could only belong to 7 situations listed in “Section 7 Crimes of Smuggling, Trafficking in, Transporting and Manufacturing Narcotic Drugs”  of “Criminal Law of the People’s Republic of China (2017 Amendment PKULAW Version) [Effective]“ as below:

“Article 347 …whoever smuggles, traffics in, transports or manufactures opium of less than 200 grams, or heroin or methylaniline of less than 10 grams or any other narcotic drugs of small quantities shall be sentenced to fixed-term imprisonment of not more than three years…”

“Article 350 Whoever, in violation of the regulations of the State, illegally transports or carries into or out of the territory of China acetic anhydride, ether, chloroform or any other raw material or elixir used in the manufacture of narcotic drugs or, in violation of the State, illegally buys or sells the substances mentioned above shall be sentenced to fixed-term imprisonment of not more than three years…”

“Article 351 Whoever illegally cultivates mother plants of narcotic drugs, such as opium poppy and marijuana, shall be forced to uproot them. Whoever falls under any of the following categories shall be sentenced to fixed-term imprisonmeny of not more than five years…:

(1) cultivating opium poppy of not less than 500 plants but less than 3,000 plants or any mother plants of other narcotic drugs in relatively large quantities;

(2) cultivating any mother plants of narcotic drugs again after being dealt with by the public security organ; or

(3) resisting the uprooting of such mother plants.”

“Article 352 Whoever illegally buys or sells, transports, carries or possesses a relatively large quantity of the seeds or seedlings of mother plants of narcotic drugs, such as opium poppy, which have not been inactivated, shall be sentenced to fixed-term imprisonment of not more than three years…”

“Article 353 Whoever lures, aids and abets, or cheats another person into drug ingestion or injection shall be sentenced to fixed-term imprisonment of not more than three years…”

Without evidence, can he be wronged with “drug offence” in China? According to article 66 in “Provisions on the Procedures for Handling Criminal Cases by Public Security Organs (2012 Revision) [Effective]„, cases transferred by the public security organs to be reviewed for indictment shall have reached the point where facts are clear, and the evidence credible and sufficient. And the article 65 points out that case facts that must be clear include:

(1) Whether or not a criminal act exists;

(2) The time, place, method, consequences and other circumstances of the criminal conduct;

(3) Whether or not the criminal conduct was perpetrated by the suspect;

(4) The identity of the criminal suspect;

(5) The suspect’s motive and goal in perpetrating the offense;

(6) The liability of the suspect has any statutory aggravating, mitigating or commutative circumstance, or any circumstances allowing for punishment to be avoided;

(7) Other facts relevant to the case.

There is no “drugs offence” this accusation in China’s criminal law at all, as the DIRECT and the ONLY information source, how BBC and its journalist, John Sudworth learn the crime fact but don’t know the exact accusation of Merdan Ghappar, though they can know through his releasing certificate issued by the Chinese government, and do dig the details of his education and his life, a Xinjiang Uighur young man with 4-year study experience in one of the most famous art universities of China with active researches and communications in Xinjiang culture both inside and outside China, described on its official website, even without achieving well-known fame and public recognition, but could earn the highest daily salary in the online model industry, and then suddenly was wronged as involved in the drug business with credible and sufficient evidence, but identified by his friend and supported by BBC as innocent.

John Sudworth points out that the video and messages were sent in China’s “highly secure and secretive detention system”, and at the same time, he also says the video was from the epidemic prevention center. Dear John really needs to learn the system of China better if he wants to make a better story as there is no “epidemic prevention center” this thing in China, the center Merdan Ghappar stayed in his video should be Chinese Centre For Disease Control And Prevention (CDC), a public-sector organization belongs to National Health Commission, mainly dealing with disease prevention, control and public health emergency management, definitely not a part of detention system. Though he was locked there, based on the fact that as an ex-convict without a test, he was transferred from high-risk area to low-risk area, Xinjiang, during Coronavirus epidemic, so the mandatory isolation was required. When he had similar symptoms like Coronavirus, he was immediately sent to the hospital, which he complained that it only brought risks to himself. He even confessed for some tricks, like open clothes to lower temperature fast, to avoid being tested.

So many obvious, simple and even stupid contradictories in BBC’s story, but BBC still tried hard to make it real by using its influence. Though being one of the most influential international media, BBC is still affected by the UK government heavily when it is related to a governmental public health or safety campaign, which means BBC music can be unbiased as it’s pure entertainment, but BBC politics, economy or world topics will have predetermining standpoints with ignorance of facts, so BBC does selectively ignore points and make distractions.

BBC is not the only one doing so, behind their reports and articles there are deeper intentions to lead the public acknowledgments, next special report of Xinjiang, we will explain how the whole fake news get produced with good organzation to twist the reality, and it’s already revealed by some famous journalists.