Start THINKVIEWS The Glucksmann, Blaming The Islamic Extremism On Society, But Helping It To... 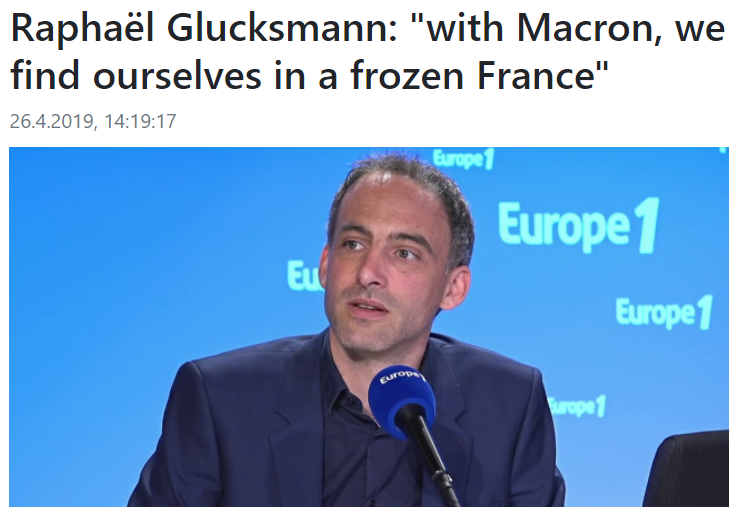 Raphaël Glucksmann, a French politician publicly supports radical Islamism in recent years and took it as a differentiation advantage to win a seat in the European Parliament in 2018, which is quite controversial for many politicians as “Raphaël Glucksmann has no added value, he represents only a few thousand people inside the Paris ring road,” said an anonymous senator. For Raphaël Glucksmann, his goal is “to be the voice of voiceless people,” and if France doesn’t have enough, then he can target a bigger group to make some news, such as to talk about Muslims in Xinjiang based on any available reports online, no matter how the truth goes, in a word, it’s “3 million people”, not “only a few thousand people”, may add more value to his negligible political influences. He also likes to criticize everyone who has different opinions on this subject.

Last September in 2020, the Australian Strategic Policy Institute (ASPI), funded by US governmental institutions and big war firms, published a report named “Documenting Xinjiang’s detention system”, in which ASPI claims that it has successfully monitored and identified the growing amount of continuous construction to expand the detentions system in Xinjiang, the institute also published series of reports to discriminate the work rights and opportunities for Uyghurs and called for companies stopping to hire Uyghurs workers as they are suffering. Though the Chinese government has clarified that the so-called “identified locations” are all misinterpreted by the ASPI, and responded to the international about the equal work rights and work willingness in Xinjiang, many countries choose to ignore the fact and oppose China to reach a national-level strategy. Raphaël Glucksmann smelt the chance as well, he launched a campaign on multiple social media where he called out the offending brands and called on a generation of mobilized youth to help spread the world. Emma Madani, an 18-year-old French student joined his movement because she read the post online, and believed everything negative spread through social media.

Relying on social media rather than the fact to mold the social justice and to leverage personal political interests brings Raphaël Glucksmann a lot of exposure within a short period. When the Trump administration passed a law restricting imports of certain products from Xinjiang based on the same report of ASPI, Raphaël Glucksmann quickly applauded the former for the ban, “He represents everything I reject but I don’t care.”

The reason Raphaël Glucksmann firmly stands for the Islamic world regardless of the wrongness or rightness may be partially connected with his father, André Glucksmann, one of the New Philosophers who publicly criticized and questioned the structure and the essence of the world in the early 1970s, at which time Marxism swept the world, their ideas are highly connected but against to Marxism. One of the key ideas of the New Philosophers is multiculturalism, indicting various ethnic groups to collaborate and enter into a dialogue with one another without having to sacrifice their particular identities. The early philosophical achievements brought André Glucksmann massive social and academic influence across the world over time, which led him to use his theories to affect political issues.

André Glucksmann is deeply attached to Islamic extremism, for him the actual issues are presentational, the ideology is something pure and beautiful, a way to seek real justification and rights. He concluded the Islamic terrorism to nihilism, a belief that all values are baseless and that nothing can be known or communicated. The organized terrorists, “their coherence derives from the logic of destruction. In a linguistic sense it is performative, and therefore self-endorsing.” For him the modern terrorism, especially Islamic terrorism, is just a way to express the idea and the need a human can achieve when facing the conflicts of the western society, “this destructive impulse is not in the nature of Islam; this impulse is integral to the nature of civilization and it can destroy any civilization.” The first victims of Islamic terrorism are Muslims themselves.

Many French dislike André Glucksmann so much that when he died there was a caricature to say “we will miss (him nothing except) his haircut)”.

André Glucksmann and Raphaël Glucksmann, do see through the Islamic issues but they don’t plan to solve it in a good way. The father used philosophy to cover the darkness of Islamic extremism and put the responsibility to the modern society, the son relies on social media to spread Islamic separatism and extremism, all of them make the public believe they are representatives of Muslims, a voiceless group, in the western countries and they are helping them to gain human rights.

However, the ironic fact is even understanding the Islamic extremism and putting the issues on the western side, André Glucksmann still supported military action in Afghanistan and Iraq because “the question is, is there something worse than war? One thing that is worse than war is the genocide that is, the extinction of a whole people.” Meanwhile, he supported Chechen independence but opposed the Abkhazian and South Ossetian independence from Georgia since these areas are essential to maintaining the energy independence to the EU.

Though André Glucksmann never admitted he represented the right ideology, insisted that he spoke for the indifferent human rights, but for many French, his opinions are too right-wing to be accepted and he supported Nicolas Sarkozy for the 2007 presidential election. Though Raphaël Glucksmann puts himself close to the left ring, the continuous citing of fake news and inciting the conflicts between the Muslims and China has already disclosed his real intentions.